French youth marched in a massive rally today in Paris…
And, once again they were greeted at the end of their long march not with jobs but with fists. 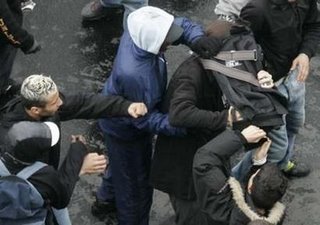 Hooded youths attempt to wrestle a video camera from a journalist (C) during a nationwide protest by students and unions demanding the government to scrap a contentious youth job law, Paris March 28, 2006. (REUTERS/Benoit Tessier)

The State Department warned Americans of violent protests in France… No kidding! 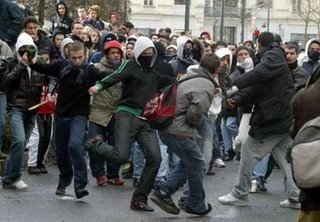 French students are attacked by a gang of hooded youths from poor suburbs during a nationwide protest demanding the government to scrap a youth jobs law during a demonstration in Rennes, western France, March 28, 2006. (REUTERS/Daniel Joubert)

Suburban youths were blamed for the violence at the protest last week in Invalides Park. Police met to make sure that the same type of violence did not meet the protesters on Tuesday:

A day before the demonstrations, two cars were set on fire at a protest in front of a high school in Seine Saint Denis, police said. The suburban Paris region was a focal point of fall unrest in immigrant communities that spread across France. Interior Minister Nicolas Sarkozy has said many suburban youths behind November’s rioting were involved in Thursday’s violence at the Invalides. He was meeting with police before the Paris march begins Tuesday.

It didn’t do much good. 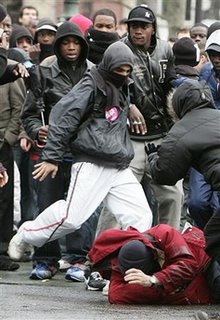 A French student is attacked by a gang of hooded youths from poor suburbs during a nationwide protest demanding the government to scrap a youth jobs law during a demonstration in Place de la Republique in Paris March 28, 2006. Students and unions in France stepped up protests against the First Employment Contract (CPE) law, an open-ended contract for under 26-year-olds that can be terminated within the first two years without justification. (Thierry Roge/Reuters)

“Police and transport officials were monitoring the rail and bus systems to try to stop unruly elements from entering the capital.”

Paris, the City of Fire and Fountains! 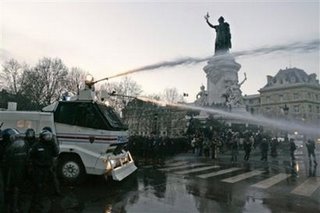 Police disperses protesters with water cannons on republic square during a protest against the first job contract law, known as CPE, Tuesday, March 28, 2006 in Paris. More than 1 million demonstrators poured onto France’s streets, and strikers shut down the Eiffel Tower and disrupted plane, train and bus services Tuesday in the largest nationwide protests so far against a new law that will make it easier to fire young people. The statue of the French Republic is seen rear right. (AP Photo/Francois Mori)

Powerline has thoughts on the economic suicide of the French youth.
No Pasaran! is following the battles.