** Female Delegate Malalai Joya took on the warlords in the Afghani Parliament. This week she took on Yale! **

From her first day in Parliament:
Afghan parliamentarian Malali Joya stood up to warlords in the parliament’s first session, accusing them of human rights abuses and refusing to be quiet when they told her to. Malalai called for all of Afghanistan’s human rights abusers and “criminal warlords” to be brought to justice. Delegates responded by pounding their fists on the tables to demand she sit down. She refused, shouting that it was her right as an elected official to speak.
USA Today
December 20, 2005
More at Publius Pundit

Video of her historic speech from “Defend Malalai Joya” HERE 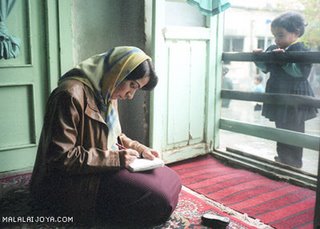 Joya writing her notes in her home in Farah. Photos by Marie Dorigny which has been published in the French version of ELLE magazine on Jan.16, 2006. (malalaijoya.org)

Outspoken Afghani Parliamentarian, Malalai Joya, blasted Yale for welcoming the Spokeman for the Taliban into the student body, in her talk sponsored by Yale on Thursday night:

Female Afghan parliamentarian Malalai Joya criticized current U.S. policy in Afghanistan, as well as the presence of former Taliban spokesman and foreign ministry official Sayed Rahmatullah Hashemi as a special non-degree student at Yale, both during and after her speech, “Women’s Rights, Warlords, and the U.S. Occupation of Afghanistan” on Thursday night.

The lecture, which was co-sponsored by the Yale Center for International and Area Studies and the Afghan Women’s Mission, drew a full crowd in Luce Hall Auditorium and was preceded by a documentary film addressing women’s rights in Afghanistan. Students at the event said Joya’s speech and ongoing campus debate over Hashemi’s enrollment indicate that his presence at Yale continues to be widely controversial, and the Yale College Council is considering a resolution urging that he not be allowed to enroll as a regular student…

…”Afghanistan’s issue is not an easy issue,” she said. “I only want to be a voice for my suffering people who are always silenced.”

After her lecture, Joya delivered a statement about Hashemi’s enrollment. She said Hashemi was one of the Taliban’s top propagandists and called his status as a student at Yale “disgusting” and an “unforgivable insult.”

“Before he was a Talib, and now he is a student,” Joya said, holding up two pictures of Hashemi. “Is it democracy?”

The YCC is currently considering drafting a resolution to petition the University’s administration to deny Hashemi admission as a full-time student, YCC President Steven Syverud ’06 said Thursday. The idea was introduced to the council by former YCC representative Austin Broussard ’06, and current representatives are discussing the controversy via e-mail, YCC Vice President Marissa Brittenham ’07 said.

Joya has been an outspoken leader for womens rights in Afghanistan. 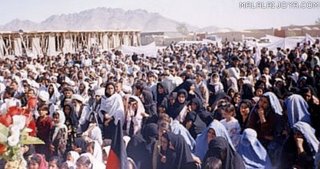 To celebrate the International Women’s Day, on March 8, 2004 Joya and her supporters organized a big gathering in the city of Farah. Over 3000 people, most of them women, participated in the rally. (malalai joya.org)

It is interesting that Yale invited Malalai to speak on campus. As Glenn Reynolds noted, Yale has not been so warm to Afghani women in the past.

Update: (3-27-06 AM) Glenn Reynolds has more on Yale’s problem with a link to John Fund’s latest in the Opinion Journal.