Yes, the Muslim World has a very special place for homosexuals.

Juan Cole at Informed Comment suggests that homosexuality has a warm place in the heart of Islam. Juan describes it this way:

Islam as a culture/ civilization has made a place for homosociality in history that is far greater than anything in premodern Christendom, and there is nothing in the Quran about gays at all (the Lot story is repeated from the Bible, but so telegraphically it cannot be used for these purposes.) 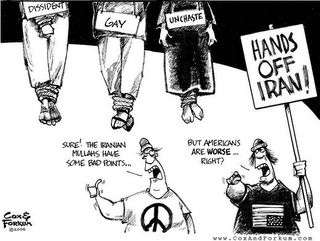 Here is Cox and Forkum’s take of the Leftists protesting yesterday the anniversary of the Iraq War and anything else that came to mind. Besides the communists, the Left is now joined by a sprinkling of Radical Islamists who claim the “War on Terror” is a war on all of Islam.

These Islamists believe they are being unfairly discriminated against because the War on Terror happens to focus on segments of their society who insist on exploding themselves in a crowd of innocent people. But, spoiling this perfect union between leftists and Muslims, rumors surfaced last week that Iraqi cleric Ali Sistani had to come out with a Fatwa against homosexuals.

Sensing trouble ahead, Juan Cole does his best to calm the fears of the homosexual sect on the Left by explaining that the “fatwas against homosexuals” are really a societal cleansing of past sexual slave-boy love practices! Andrew Sullivan didn’t buy it. If you have never read Juan Cole before, read this! It’s not that often that you get to read a posting by a leftist gay fatwa Ayatollah sympathizer!

But, back to Juan’s original homosociality claim. When was the last time (besides “Brokeback Mountain” ) that you heard of gays being imprisoned or murdered in a public square in the West?

Looking at Saudia Arabian society, besides the public floggings, the life of a gay man is a closeted dream:

Security police arrested the men on March 10 at a private party held in a rented hall in Jeddah. The government-affiliated newspaper Al-Wifaq reported that the men at the party were dancing and “behaving like women.”

On or about March 26, a Jeddah court, meeting in a closed session in which defense attorneys were excluded, sentenced 31 of the men to prison for six months to one year, and to 200 lashes each, for unreported offenses. Four other men received two years’ imprisonment and 2,000 lashes. Police released more than 70 of the men not long after their initial arrest; reports in the Saudi press suggested that personal contacts with the government had intervened on their behalf. However, on April 3, police summoned the 70 men back to a local police station and informed them that they had been sentenced to one year’s imprisonment. 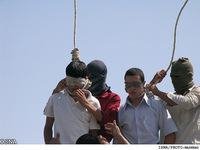 In Iran, homosexuality is illegal, those charged with love-making are given a choice of four deathstyles: being hanged, stoned, halved by a sword, or dropped from the highest perch.

The rights group, Outrage, says over 4000 lesbians and gay men have been executed since the Ayatollahs seized power in 1979.

In Egypt five men were sentenced in March 2002 to three years in prison with hard labor for engaging in gay sex, judicial officials said. Islam prohibits homosexuality and, although not explicitly referred to in the Egyptian penal code, a wide range of laws covering obscenity, prostitution and debauchery are applied to homosexuals. In 2001, in Cairo, 52 men were tried by an Emergency State Security Court on charges of immoral behavior and contempt of religion after police raided a Nile boat restaurant and accused them of taking part in a gay sex party. Twenty-three were convicted and sentenced to up to five years in prison. The rest were acquitted.

But, this is not unusual for the Muslim world.

According to Amnesty International, 83 countries explicitly condemn homosexuality in their criminal codes. 26 of those 83 countries are Muslim. There are 22 nations in the League of Arab States.

Most convictions in those 26 countries happen in the Sharia courts, which use the Koran, Sunna and Ijma as sources for law.

But, don’t worry Leftists, if you don’t mind an occasional flogging (pictured here) or imprisonment and can avoid execution…

“Islam as a culture/ civilization has made a place for homosociality in history.”