Well this ought to make your blood boil!

These young girls had to be clubbed into submission. 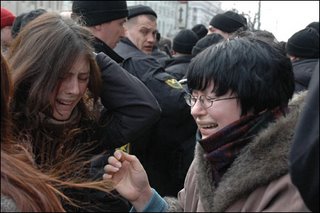 These malicious protesters had to be beaten with clubs to the back of the head.
(Charter 97)

Thousands of Belarusian protesters were prevented from getting to Oktober Square on Saturday so they held a massive rally in a nearby park.
Reuters video HERE

But, later in the day there was a bloody crackdown by the regime.

Robert Mayer has an amazing video from Ukrainian TV…

of violence that took place later in the day. After watching that brutal video and reading stories from bloggers following the clubbings and arrests, it is hard to see how the mainstream media puts up headlines like these: 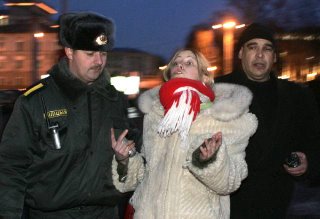 This clash involved a brutal young girl who had to be subdued by at least two of the larger policemen.
(Community.livejournal) 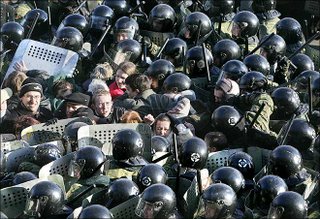 I believe they are talking about these protesters here.
(Babruisk) 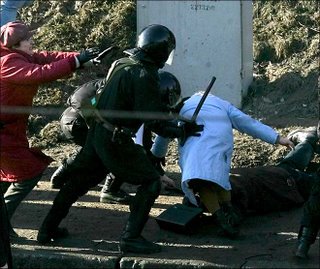 By “clash” they must be referring to this ferocious older woman trying to get the riot police from killing her older ferocious friends.
(Babruisk) 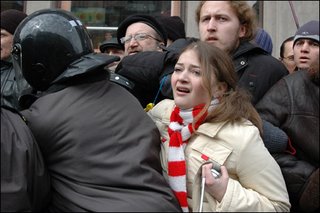 These vicious protesters armed with snowballs deserved their police clubbing. 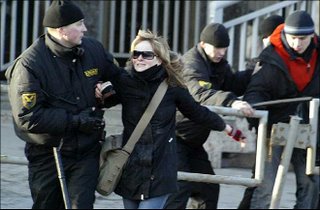 This picture shows a brave policeman escorting a powerful young protester all by himself.
(Drugoi.livejournal)

Robert Mayer has a great roundup on the protests today and the brutal clubbings and arrests that took place. Robert also has great links to bloggers who have amazing shots from the rally that took place today in Minsk.

Amazing photos also at Minsk25
Neeka’s Backlog is another great source for the protest action.
BR23 is a terrific source.
Rush Mush has links to more photos from the day.