Condoleezza Rice is greeted by protesters in Indonesia, though not as many as was anticipated,
VIDEO HERE

Condoleezza Rice met with the moderate officials from Indonesia, announced a new US funded “Indonesian Sesame Street” program, and lashed out at Myanmar’s human rights record today during her first visit to the world’s most populous Islamic country. 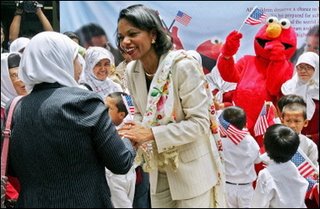 US Secretary of State Condoleezza Rice, seen here in Jakarta, praised Indonesia as an inspiration to the world, as she sought to strengthen ties with a moderate Muslim partner(AFP/Pool/Ed Wray)

Condoleezza Rice expressed support for the moderate government in place in Indonesia during her first visit to the country:

“I understand that the United States has had to do things . . . that are not that popular in much of the world,” she said. “We are fighting a very tough enemy, an enemy that has been felt here in Indonesia with bombings in Bali and Jakarta.”

She also suggested that the United States is sometimes misunderstood, and she stressed “how much the United States respects people who are of Islamic faith.” Before the news conference, Rice visited an Islamic school, where she announced an $8.5 million grant to develop a version of “Sesame Street” for Indonesia.

The Bush administration has been eager to demonstrate its support for budding democracies, especially in Indonesia, the world’s most populous Muslim country.

Condoleezza pointed to the outpouring of American support tsunami disaster in 2004 that killed 130,000 people in Indonesia’s Aceh province alone. 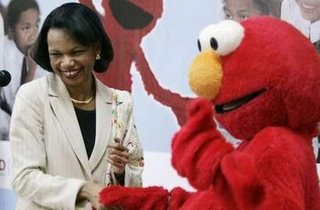 U.S. Secretary of State Condoleezza Rice jokes with a Sesame Street character after announcing a new U.S. funded ‘Indonesian Sesame Street’ program at an Islamic school in Jakarta March 14, 2006. Rice began a trip to Indonesia on Tuesday amid protests by Muslim hardliners as she sought closer ties with the moderate Islamic country in a region where China’s influence is growing. (REUTERS/Ed Wray)

Rice’s visit drew hundreds of Islamic hard-liners to demonstrate outside the heavily guarded U.S. embassy. The crowd was far smaller than last week’s rally by about 5,000 people, who demanded that U.S. troops leave Iraq and Afghanistan and called Bush a terrorist and a colonialist.

Rice held up Indonesia as an example of tolerance, making an implicit contrast with extremist Muslim ideology and Islamic terrorism.

However, not every one was pleased with the Secretary of State’s visit. 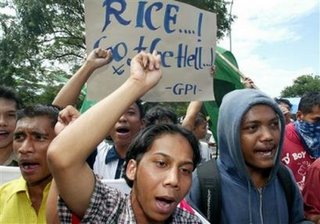