Condoleezza Rice in not only an intellectual, a classical pianist, and a figure skater, but now an Anti-American Egyptian film shows Condoleezza Rice as a talented belly dancer!

An Egyptian comedy on the invasion of Iraq has been drawing crowds for two months. Even as Ms Rice was discussing war and peace in the Middle East on Egyptian TV recently, her look-alike was wooing cinema audiences through belly dancing.

Titled “The Night Baghdad Fell”, the wildly anti-American film depicts Egyptian obsessions with war, sex and, of course, the US. 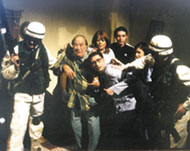 In the Egyptian Anti-American film US tanks roll into Cairo and the skyline is filled with black smoke from all of the bombing:

Mohamed Amin, the film’s director-scriptwriter, tells Aljazeera.net: “This is definitely an anti-American movie and it makes a point of illustrating Egyptian hatred for the US. But I’m actually mocking us, Egyptians, not them.”

He also points out that there is a clear “distinction [between the] American people and culture – which I respect – and devious, arrogant US policies.”

US tanks begin to roll into the Egyptian capital, Cairo, and the city’s Sixth of October bridge and the famous Nile corniche promenade are destroyed.

The Cairo skyline is covered in a chilling black shroud. The capital is transformed into a ghost city, its besieged inhabitants are tortured in Abu Ghraib-like prisons and the women are raped and humiliated.

Or so the story goes in Laylat Soqoot Baghdad (The Night Baghdad Fell), the first Arab film production on the invasion of Iraq released in Egyptian theatres in late December.

“I felt that an event like the fall of Baghdad could not pass without some sort of comment,” said Mr Mohammed Amin, the film’s director.

“All we Arabs could do was sit and watch it on TV. So I decided to make a movie about impotence. That is what it is all about.”

Meanwhile in Turkey, an Anti-American movie spinoff from Turkey’s number one television program is setting box office records. The movie features American actor Gary Busey as a Jewish U.S. army doctor who cuts out the organs of Iraqi prisoners at Abu Ghraib and sells them to wealthy foreign clients in “Valley of the Wolves, Iraq.”