Update 2: (Friday AM) The Article on the Child stalking Muslims was juiced up by a politician. It is not true.
Hat Tip Carsten Agger

** Update: Now the Radicals are Going after Children!! **

Agora reports that radical Muslims have targeted the daughter of one cartoonist!

I wonder how many Westerners will go for that?

The first British newspaper to publish one Muhammad cartoon was recalled… 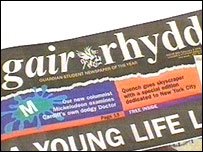 …And, the editor and 2 journalists were suspended.

Andy at Taking Aim writes in about the first paper in Great Britain to publish the Muhammad cartoons:

A Welsh student newspaper was forced to recall thousands of copies of this week’s edition after being the first British paper to publish one of the controversial Danish cartoons satirising the Muslim prophet Mohammed. Gair Rhydd, run by Cardiff University Student Union and winner of last year’s Guardian Student Newspaper of the Year award, printed the cartoons in an edition which should have been released last Saturday.

A press release from the Student Union confirmed that the edition had been pulled and that the editor, Tom Wellingham, and three journalists had been suspended from the newspaper pending a university investigation. A spokesperson said the newspaper was recalled after a member of the Student Union noticed the article whilst delivering the paper on Saturday morning. “The edition featured a short piece about the controversy surrounding the Danish satirical cartoons,” she said.

“The article was entirely balanced but included a picture of one of the cartoons. We recalled the issues straight away. We do a print run of 10,000 copies and all but 200 have been accounted for.”

The Student Union sent out the following apology to those offended:

“The Students’ Union very much regrets any upset caused or disrespect shown by the publication of the controversial cartoon and has taken immediate action by promptly withdrawing all copies of this week’s edition of Gair Rhydd.”

Not everyone agreed with the decision to recall. This page was reproduced from the latest edition’s editorial page of Gair Rhydd or “Free Word”: 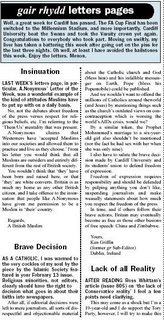 (Click to Enlarge)
Notice the letter to the “new” editor from the former sub-editor of Gair Rhydd which I am rewriting here:

As a Catholic I was warmed to the cockles of my soul to the piece by the Islamic Society featured in your February 13th edition. Religious minorities and not editors should clearly have to decision what goes in about their faith in newspaper.

After all, if editorial decisions were left to major journalists, all sorts of disrespectful and objectionable material about the Catholic Church and God (bless him) and his infallible messenger on Earth, Pope (bless his popemobile) could be published.

And we wouldn’t want to offend the millions of Catholics around the world (and Jesus) by mentioning things such as the Church’s outdated views on contraception which is worsening the world’s AIDS crisis would we?

By a similar token, the Prophet Muhammad’s marriage to a six year old girl also should not be mentioned (nor the fact that he had sex with her when she was only nine).

I also have to salute the brave decision by Cardiff University and its student union to defend freedom of expression.

Freedom of expression requires responsibility and should be defended by pulping anything that you don’t like, suspending journalists, and make weaselly statements about how much you respect the freedom of the press.

In time, and if others follow their brave actions, Britian may eventually become as free as those other bastions of free speech: China and Zimbabwe.

If you would like to contact the “new” editor of the Gair Rhydd, you can fill out a comment easily on THIS PAGE. Be respectful, please.

Wikipedia has the list of the 143 world papers that have published the cartoons.