While George Bush was disciplining the unruly dame at the DC gaggle, Dick Cheney was giving his own tongue lashing to the quitters and nay sayers on the Left in his speech at Scott Air Force Base in Illinois. 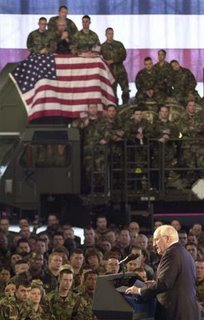 I am here, very simply, to say thanks to every person, military or civilian, who serves here … and to recognize the extraordinary contributions of the 375th Airlift Wing… I want to thank all the members of the tenant units … the reservists of the 932nd Airlift Wing … the 126th Air Refueling Wing of the Air National Guard … and the units headquartered here: TRANSCOM; Headquarters Air Mobility Command; Air Force Communications Agency and the Defense Information Systems Agency.

As the Iraqi people step forward to participate in the government of their country, the terrorists will continue to commit acts of random horror, calculated to shock and intimidate the civilized world. There is no doubt that the situation in Iraq is still tense. The terrorists know that as freedom takes hold, the ideologies of hatred and resentment will lose their appeal … and the advance of democracy will inspire reformers across the broader Middle East. And as that region experiences new hope and progress, we will see the power of freedom to lift up whole nations … and the spread of liberty will produce a much safer world for our children and grandchildren. The war on terror is a battle for the future of civilization. It is a battle worth fighting. And it is a battle we are going to win (Crowd goes nuts!)…

Our strategy in Iraq is clear, our tactics will remain flexible, and we’ll keep at the task until we finish the job. Progress has not come easily, but it has been steady, and we can be confident going forward. First, as all of you know very well, the United States military is doing remarkable, heroic, honorable work each and every day. Second, the Iraqi people themselves deserve to be free — and they want to be free. By voting in elections … by ratifying a constitution … by going to the polls with an amazing voter turnout rate of more than 70 percent … Iraqis have shown that they value their own liberty and are determined to choose their own destiny. And America is proud to stand at their side.

Recently there have been some prominent voices advocating a sudden withdrawal of our forces from Iraq. Some have suggested that this war is not winnable … and a few seem almost eager to conclude that the whole struggle is already lost. But they are wrong. The only way to lose this fight is to quit — and that is not an option. (Wild Applause!)

The crowd was loving Cheney’s speech. It is too bad the video above cut out the applause in their clip. I heard it was thunderous. Jamie Allman was there and has more.

Powerline notes on how the press reported the President’s Press Conference.

Please, George, let this continue! It is amazing how a few days of this truth can influence the public’s opinion on this successful War on Terror being fought in Iraq and Afghanistan. Watching the Left is like watching a balloon deflate as the truth is thrown at them. Lies about “Bush wanting and scheming for war” hold no weight against the truth. But, President Bush must continue on offense. (It probably wouldn’t hurt if he had more confrontations with Helen Thomas, either!) He must for the sake of our sacrifices in Iraq and Afghanistan, for the future of this country and for freedom and democracy everywhere. He can’t let Osama bin Laden or the Left win on this front.

The Anchoress covers the president’s press conference as only she can and a number of other topics in her post from yesterday.

I agree with Betsy who agrees with the Washington Post on this.