“In Nepal, we agreed that the Maoists should abandon violence, and that the King should reach out to the political parties to restore democratic institutions.”

President Bush’s 25 words are rumbling over the hills of Nepal. 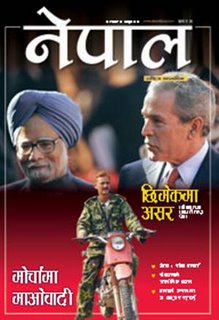 George Bush with Prime Minister Singh made the front page of Kathmandu Post and other papers in Nepal.

President Bush’s statements on Nepal from India made headlines this weekend in Nepalese newspapers:

Nepal’s anti-establishment daily The Kathmandu Post on Friday relegated its own government to the sidelines to report the Bush visit.

The report was accompanied by a huge photograph of Bush and Indian Prime Minister Manmohan Singh shaking hands.

King Gyanendra, who has been ruling Nepal with an iron hand since last year when he seized power through a bloodless coup, was relegated to a single column on the left hand that dismissed his ongoing parleys with loyalist leaders as “pointless”.

The more moderate Himalayan Times highlighted the civilian nuclear cooperation deal between India and the US as its front page top story, saying “India, US clinch momentous nuclear deal”.

The main story, complete with a photograph of Bush with his arm on Singh’s shoulders, was accompanied by a smaller report that said “Manmohan, Bush one on Nepal”.

The handshaking picture re-appeared in the weekly Nepali Times on Friday with the focus on Nepal. “Bush talks to India about Nepal: US anxiety over Nepal’s troubles figure in George W Bush’s talks with Indian leaders,” the headline said.

Lawyers marched in Kathmandu on Saturday for peace and democracy. 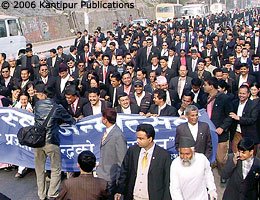 Lawyers participating in the All Nepal Lawyers Conference take out a peaceful rally in favour of peace and democracy and human rights in the capital, Saturday. (eKantipur)

United We Blog for a Free Nepal, a group blog of Nepalese journalists, was excited, to say the least:

25 Words, Two Commas and a Fullstop

That was the sentence that was. A big full stop right after that. They AGREED. And that single sentence has sent a tremor in Kathmandu, the capital of Nepal. Thaha payeu, Bush le Nepal bare bolyo ni! Okay, that was what a colleague enthusiastically told me this evening: Did you know that Bush spoke about Nepal? I am sure someone must have told the occasional residents of Ratna Palace in Pokhara the same sentence with same level of enthusiasm. Well, not enthusiasm but with anxiousness, I guess. I am also sure that the Bush Sentence will find a plum space on the front pages of all national dailies (yes, including Gorkhapatra, I think) tomorrow.

Already serious efforts of decrypting that sentence appears to have begun. “It’s really a big news,” one scribe said. “Bush speaks about Nepal.” President Bush is a master summarizer. He must have gotten full marks in that skill. He presented a solution in Nepal in a single sentence (with 25 words, two commas and a full stop, according to a White House transcript of the proceeding of the joint news conference made available at their official web site)…

Here is what one commenter, twaaks, had to say about Bush’s visit to the region:

“The slogan “Yankee go home” can be heard everywhere, but what you don’t hear is the hidden wish Yankee go home and take me with you.” -exactly!

A little background, Nepal has seen 12,000 die in its civil war over the last decade:

After a long and complex history, during which the region has splintered and coalesced under a variety of absolute rulers, Nepal became a constitutional monarchy in 1990. This arrangement has been marked by increasing instability, both in the parliament and, since 1996, throughout large swathes of the country that have been fought over by Maoist insurgents. The Maoists have sought to overthrow the monarchy and establish their own form of republic; this has led to a civil war, known as the Nepalese civil war, in which more than 12,000 people have died.

On February 1, 2005 with the stated pretext of quashing the insurgents and restoring elected democracy to the country, the king declared a “state of emergency” and assumed the role of Chairman of the government, assuming all executive powers. There have been several protests against the monarch since he took
complete control last year. Many of these have turned violent.

United We Blog is a great source keeping up with the situation in Nepal.
Publius Pundit has been following deveopments in Nepal.