Bush says the ports deal reversal sends a bad message to moderate US allies in the Middle East,
VIDEO HERE

“I’m concerned about a broader message this issue could send to our friends and allies around the world. In order to win the war on terror, we have got to strengthen our relationships and friendships with moderate Arab countries in the Middle East.”

The US already sees signs of fallout for snubbing the UAE. 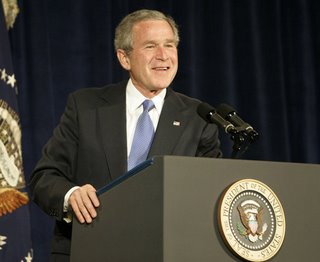 Part of winning this war on terrorism requires alliances. America has got a lot of friends in the war on terror. People understand the stakes. They understand that the bombings around the world were an indication of the plans that terrorists have for those of us who embrace freedom.

Obviously, you’ve been reading about the UAE issue. And I want to make a comment on that, the port issue. I’m sure that the decision by DEPARTMENT World was a difficult decision, to hand over port operations that they had purchased from another company.

My administration was satisfied that port security would not have been undermined by the agreement. Nevertheless, Congress was still very much opposed to it. My administration will continue to work with the Congress to provide a greater understanding of how these transactions are approved, in other words the process, and how we can improve that process in the future.

I’m concerned about a broader message this issue could send to our friends and allies around the world, particularly in the Middle East.

In order to win the war on terror, we have got to strengthen our relationships and friendships with moderate Arab countries in the Middle East. UAE is a committed ally in the war on terror. They are a key partner for our military in a critical region.

And outside of our own country, Dubai services more of our military — military ships — than any country in the world. They’re sharing intelligence so we can hunt down the terrorists. They’ve helped us shutdown a worldwide nuclear proliferation network run by A.Q. Khan. UAE is a valued and strategic partner. I’m committed to strengthening our relationship with the UAE and explaining why it’s important to Congress and the American people.

Cassandra may have said it best:

In their cynical pandering to a craven and ill-informed electorate, our trigger-happy Congress has once more fired off a shot that will indeed be heard round the world…

…Thank you, Senators Schumer and Clinton for opening your stately blowholes and fanning the flames of xenophobia and ignorance. Oh, and congratulations to the Republican party for your stellar support of the war on terror. Now if we could only win the war on stupidity here at home. I’m sure our armed forces will remember you fondly the next time we need to negotiate logistical arrangements or port privileges with the Arab Emirates.

Already… The US and UAE announced a delay in free trade talks today.

And Stratfor has this ominous view on fallout from the ports deal:

Bush is right about the repercussions this development could have on U.S. interests at a time when Washington is trying to prosecute its war against jihadism and when relations between the West and the Islamic world continue to deteriorate.

Though governments in the Persian Gulf region and beyond — including the UAE — will remain U.S. allies, the port deal’s death will enhance anti-U.S. and anti-Western sentiments among the people. Radical and militant Islamists can manipulate those sentiments, raising the probability of violence in countries prosperous and stable enough to have resisted radical Islamist and jihadist impulses thus far.

And, still we are yet to hear how this will affect the Saudi controlled ports already operating in the US.

Musing Minds has more on Bush’s talk today including his remarks about free speech.
Jack Lewis is more positive about the political ramifications from this ordeal.