President Musharraf thanked the US for assistance in the aftermath of the tragic earthquake back in the fall. Musharraf also publicly thanked Bush for efforts in bringing peace to the region. And, the Pakistani president thanked President Bush for showing concern over the cartoon controversy,
VIDEO HERE (BBC) 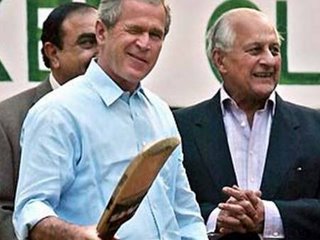 When asked, Bush maintained his love for baseball. (FOX)

President Bush also praised President Musharraf for Pakistan’s support in the War on Terror, before he tried his hand at cricket on Saturday. 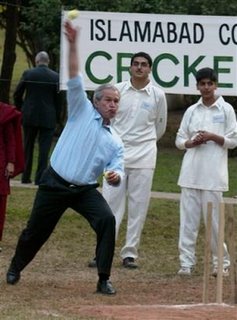 After a day of meetings in Paksitan where Bush said he was convinced of Pakistan’s commitment to the War on Terror, Bush took to the cricket field:

After a day of meetings, Bush rolled up his shirt sleeves Saturday afternoon and headed out to the lawn of the U.S. Embassy to play the baseball-like sport with Pakistani students.

Bush took three practice swings with the bat, which is flat on one side and humped on the other. He pretended to knock dirt from his shoes like a baseball player stepping up to the plate, then strode up to the wickets for a few swings.

Bush told the bowler(?) to “Put something on it!” 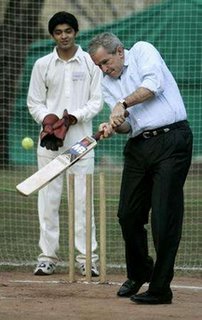 Bush spent some time at batting and bowling in the game of cricket as he wraps up his trip to Afghanistan , India and Pakistan. (REUTERS/Jason Reed)

The president connected with the first pitch, was hit in the shoulder by the second one, and sent a third ball sailing into a tree.

“Put something on that thing,” Bush called out to the bowler, the equivalent of a pitcher in baseball. “Do I have my elbow right?”

Asked whether he liked this country’s national pastime better than America’s, the former owner of the Texas Rangers baseball team paused and cocked his head before answering. “I haven’t quite got the skills yet,” he said.

The president was surprised by a “googly” on one pitch; a type of ball where the bowler seeks to surprise the batsman. 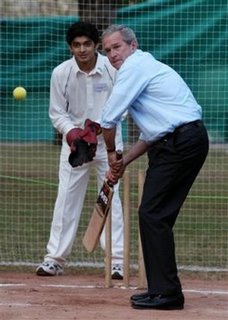 U.S. President George W. Bush prepares to play a shot as unidentified player, left, from the Islamabad College for Boys, right, look on during a cricket workshop at the U.S. embassy in Islamabad, Pakistan, Saturday, March 4, 2006. (AP Photo/Anjum Naveed)

Laura Bush met with Pakistani schoolchildren while George was at meetings. Pakistan has one of the lowest literacy rates, only 48.7 percent of adults are able to read and write.

As Dick Durbin would say after a pitch like this… “To the gulags with you!”

In this four picture sequence U.S. President George W. Bush is seen being hit by a cricket pitch during a cricket workshop with players from the Islamabad College for Boys at the U.S. embassy in Islamabad, Pakistan, Saturday, March 4, 2006. Wicket keeper at rear is unidentified. (AP Photo/Charles Dharapak)

President Musharraf said that Bush showed concern over the sentiments of the Muslim world in respect to the Muhammad cartoons published in Denmark.

Isaac Schrodinger says it could have been worse.