Update: (Friday 11:00 PM CST) The AP has come out late on Friday to say correct they were mistaken in their story this week. The president was not warned about breaches in levees as the AP and every other media outlet in the country claimed. THERE WAS NO STORY! They admit this on a Friday night, no less. 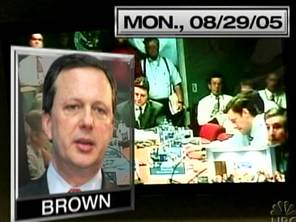 Tree Hugging Sister sent this development today on the “Who’s to blame for the 4.0 hurricane story”:

NBC News has now obtained the videotape of a key private meeting between federal and state officials on Monday Aug. 29, the day Hurricane Katrina hit. Though Michael Brown has been critical of President Bush, the tape shows Brown praising the president that day, saying they’d already talked twice.

Yet, Brown told NBC’s Brian Williams last week that he repeatedly and emphatically warned how bad Katrina would be, but no one listened.

“I want to jam up supply lines,” Brown said last week. “I want to cut the bureaucratic red tape. I want it, balls to the wall was the phrase that I used, in doing everything we could.”

The Coalition of the Swilling has much more on Ex-FEMA Head Michael Brown and Louisiana Governor Blanco.