As Bill Clinton was advising the UAE monarchs on how to sell the ports deal to America, Hillary Clinton poses on Staten Island and speaks of introducing legislation to prohibit foreign government companies from owning or controlling port operations.

From Marc Cooper (via Instapundit):

Oh, I can’t tell you how much I love this one. Bill Clinton advising the monarchs of Dubai on how to sell the ports deal. I’d expect no less from Slick Willie. Just happy to see one more confirmation of what absolute, rank opportunists he and the Missus are. It all reminds me of how the Whitewater development project specialized in ripping off working class rubes with bait and switch mortgage deals. Yum-yum!

Hillary puts up with a brisk wind to pose for a few port shots. 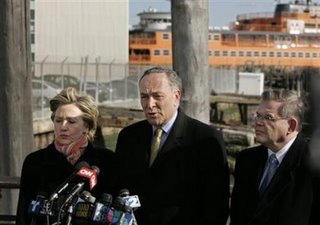 With the Staten Island ferry behind them, Sen. Hillary Clinton, left, D-N.Y., and Sen. Robert Menendez, right, D-N.J., flank U.S. Sen. Charles Schumer, D-N.Y., as he speaks to the reporters in Battery Park, Sunday, Feb. 26, 2006, in New York. DP World, a United Arab Emirates-based company, on Sunday offered to submit to a broader U.S. review of the security risks from its deal to take over major operations at six American ports. Seeking to avert a showdown between President Bush and Congress, DP World also promised to create an American subsidiary that would function independently of executives in Dubai. (AP Photo/Kathy Willens)

But, Bill Clinton is not the only former politician working to help the Dubai ports company. Bob Dole and Madeline Albright were also hired by the Dubai Ports to help sway skeptical law makers:

Sens. Robert Menendez, D-N.J., and Clinton have said they will introduce legislation to prohibit companies owned or controlled by foreign governments from running port operations in the United States.

Dubai Ports is lining up powerful supporters to persuade skeptical lawmakers the deal is a good idea. Even before the controversy erupted, the company had hired Bob Dole’s law and lobbying firm, Alston & Bird LLC, to win approval for the deal. The Albright Group, led by former Secretary of State Madeline Albright, also has been trying to speak with members of Congress.

But, Bob’s business is putting his wife, Senator Elizabeth Dole, in a precarious position:

Meanwhile the lobbying of former Senate majority leader Robert J. Dole on behalf of the Dubai-owned company set to take over management of terminals at six major U.S. seaports is creating a political problem for his wife, Sen. Elizabeth Dole (R-N.C.).

The chairman of the North Carolina Democratic Party, Jerry Meek, yesterday called on Sen. Dole to remove herself from “any congressional oversight” of the Dubai port deal. “The fact that Dubai is paying her husband to help pass the deal presents both a financial and ethical conflict of interest for Senator Dole,” Meek said.

Tammy Bruce says that Clinton bed is getting very crowded.