At his Globalization talk in London…
Bill misdirects his envy. 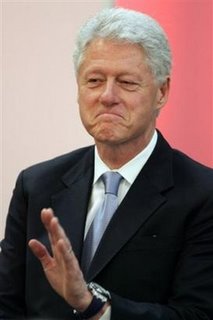 Former U.S. President Bill Clinton reacts to applause before he delivers his keynote speech in The Smith Institute Lecture at Guildhall in London, Tuesday, March 28, 2006. (AFP)

Former President Bill Clinton is starting to look and sound more and more like Jimmy Carter every day. Today Bill Clinton again slammed George W. Bush while at a speaking engagement out of country. In a strange political twist of misrepresentation, Clinton ripped into the booming US economy saying Great Britain’s slow growth economy was the envy of America:

Former U.S. President Bill Clinton said on Tuesday that Britain’s economy, environmental policy and attempts at modernization were envied in the United States, where comparable policies under President George W. Bush were lacking.

Speaking to a packed audience at London’s Guildhall, Clinton specifically responded to criticisms that British Prime Minister Tony Blair and his Labour party were “long in the tooth,” or past their prime.

“If you live where I live and you look across the Atlantic, it does not look that way,” he said.

Clinton’s 45-minute speech on progressive politics and globalization, organized by the Smith Institute, a Labour-leaning political think tank, touched on a wide array of topics, including the war in Iraq, job outsourcing, the threat of communicable diseases and even the Danish cartoons that infuriated much of the Muslim world earlier this year.

Bill’s speech was a nice plug for Prime Minister Tony Blair but that was about it. Great Britain has good economic numbers considering it is an EU country, but the Brits and EU are having a difficult time competing with the United States right now. Since the mainstream media will not look into Bill’s accusations, here’s a quick glance at the two economies.

Taking a look at Great Britain:

* Britain’s gross domestic product is predicted to grow by 2 percent to 2.5 percent in the coming year. (The world’s economy is booming at an average rate of over 4%, but Europe’s growth has stagnated at an inflated 1.5%.)

* The treasurer added that inflation is sitting at 2 percent.

* British Treasury chief Gordon Brown came under fire from economists last year for his overly optimistic forecasts for the economy, and eventually downgraded his predictions significantly to 1.75 percent growth in gross domestic product for last year, marking the slowest expansion since 1992.

* The number of unemployed in Britain, as measured by the International Labour Organisation, rose by 37,000 to 1.528 million in the three months to January from the previous quarter and was the highest level since October 2002. The unemployment rate, as measured by the ILO, increased to 5.0 percent in the three months to January, up 0.1 percentage points from the previous quarter.

Now, looking at the United States:

* Real GDP increased 3.5 percent in 2005, and growth was revised up from an original estimate of 1.1 percent to a 1.6 percent annual rate for the fourth quarter of 2005. The economy has been growing for 17 straight quarters, and the composite index of leading indicators increased 1.1 percent in January, indicating continued economic growth.

* Real disposable incomes have risen 2.2 percent over the past 12 months. Since January 2001, real after-tax income per person has risen 8.2 percent.

* During the past four quarters, productivity has increased 2.5 percent. Productivity has grown at a 3.4 percent annual rate since the business-cycle peak in the first quarter of 2001.

The reality is that Great Britain, our ally, would love to have the economic growth we see in the US, but it is struggling with the rest of Europe. Bill Clinton, shamelessly, has his envy misdirected and is just playing a political game. And, since he’s only 59, we can expect many more years of his sideline president bashing in the future.