Italian Prime Minister Silvio Berlusconi gave a tough talk on fighting terror today in his landmark speech to the US Congress. At least a little over half of the members present could relate. 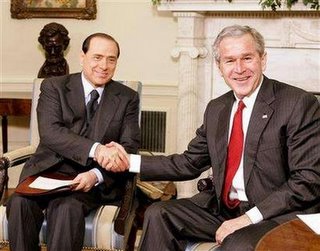 Prime Minister Berlusconi faces a tough re-election campaign at home, and his U.S. trip is seen as an attempt to create April votes by promoting his closeness to Bush.

The Italian Prime Minister made a special trip to America before the Italian elections to shamelessly use George W. Bush and repeat his tough talk on terror:

In an address to a joint session of Congress, punctuated by frequent applause from US lawmakers, Berlusconi praised America’s role in fighting facism and Nazism during World War II, and said the United States and Italy would fight side by side against global terrorism.

The Italian, government, however, is set to withdraw its 2,600 troops from Iraq by the end of this year, and last month Berlusconi called for the “swift” closure of the US Guantanamo Bay “war on terror” prison camp in Cuba.

“September 11th marked the beginning of an entirely different type of war from those that spilled the blood of humankind in centuries past,” Berlusconi said, in Italian, according to a transcript of his address.

“It is not a conflict between states, nor a clash of civilizations, because it is not an attack by Islam on the West,” the Italian leader said.

“The moderate Islam that is allied with Western democracies is itself a target of terrorists. Rather, this is an attack by radical fundamentalism, which uses terrorism against the advance of democracy in the world and dialogue among civilizations,” he said.

“Democratic governments have a daunting task: they must ensure the security of their citizens and guarantee that they can live ‘free from fear’.”

George W. Bush could not have said it better himself. Too bad Bush was not around much for the visit. But, he did join with Berlusconi for a few photos he can use in his campaign.

And, via Glenn Reynolds, even Jacques Chirac is warming to the US!