After students at Apache Junction High School tried to raise a Mexican Flag, it was burned,
VIDEO HERE 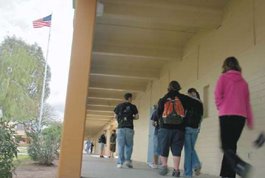 Students walk to class after lunch Thursday at Apache Junction High School. Earlier Thursday, students took down the American flag and raised the Mexican flag. The Mexican flag was taken down and burned by other students. (East Valley Tribune)

“I know (they) shouldn’t have burned the Mexican flag,” said Jacob Stewart, a 16-year-old sophomore. “I heard it was raised above the American flag and that just irked me.”

Six students were disciplined over the incident:

The Hispanic student who brought the Mexican flag said he was responding to a remark directed at him Wednesday. The flag-raising, flag-burning, and shoving match that followed happened before most students arrived at school.

Officials with the Apache Junction Unified School District would not specify what punishment the six face.

A Latino activist is calling for a Latino boycott on May 1, 2006,
HEATED FOX VIDEO HERE

Ace of Spades thinks this just might be backlash.

Victor Davis Hanson talked more about possible backlash from illegal and legal immigrant protests in his column this week.