This is a wonderful video clip of the two presidents! 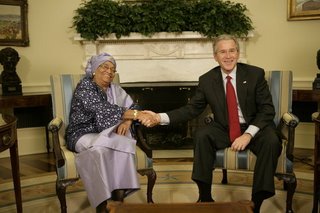 “Mr. President, as I mentioned to you, on behalf of the Liberian people, I would like to thank you — thank you, thank your administration, thank the American people, thank the U.S. Congress, for all the support that our country has received in making this important transition from war to peace.”

“Our people have new hope, they have new promise in the future as a result of the strong position you took that enabled us to get this opportunity for national renewal…

…As the first democratic-elected woman, I represent the expectations and aspirations of women in Liberia, in Africa, and I dare say, the world. And I must be able to deliver for them. My performance must justify.”

“Again, I just want to thank you for the encouragement and the support that you have given us, to enable us to meet these enormous challenges of development.”

George Bush: You know, I can remember, it wasn’t all that long ago that Laura — that would be Laura Bush — and Condi Rice came back from the inauguration of this good person. I said, okay, tell me what kind of person am I going to be dealing with? And they said: capable, smart, a person who is a doer, a person committed to a bright future for Liberia.