Finally, tonight, the Winter Games. Count me among those who don’t care about them and won’t watch them… Try not to be incredulous when someone attempts to link these games to those of the ancient Greeks who never heard of skating or skiing. So try not to laugh when someone says these are the world’s greatest athletes, despite a paucity of blacks that makes the winter games look like a GOP convention.

Newsbusters had more on this Real Sports with Bryant Gumbel moment. 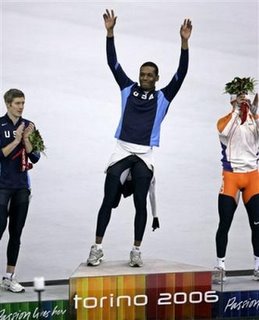 But, maybe Bryant Gumbel was on to something. Maybe Bryant was right…
Maybe the Winter Olympics are starting to look like the GOP!

Congratulations to Shani Davis and all of the US Winter Olympic Athletes!

Vonetta Flowers was the first African American to win a Winter Olympic gold medal in 2002 in the two person bobsled. -VIDEO HERE–
Oh, and Vonetta is also competing in Torino, Italy.
Her story Running on Ice is available HERE