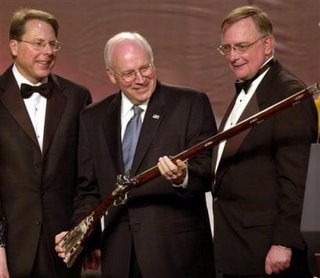 Cheney’s spokeswoman, Lea Anne McBride, said the vice president was with Whittington, a lawyer from Austin, Texas, and his wife at the hospital on Sunday afternoon.

Here is the Statement from the VP’s Office on Monday:

Statement by the Office of the Vice President

It has been brought to the Vice President’s attention by the Texas Parks and Wildlife Department this afternoon that, although he had acquired a 125 dollar Texas non-resident season hunting license, he lacked a 7 dollar stamp for hunting upland game birds. To address any questions about the licensing:

— A member of the Vice President’s staff wrote a check for 140 dollars understanding that this would purchase a Texas non-resident season hunting license that would permit the Vice President to hunt quail in Texas. It appears now that the license itself cost 125 dollars, and an extra 15 dollars covered the cost of a Federal migratory bird stamp. The Vice President did not need the Federal stamp, as he already possessed one.

— The staff asked for all permits needed, but was not informed of the 7 dollar upland game bird stamp requirement.

— Because the requirement is new, the Department has informed us that it is issuing warnings, and the Vice President expects to receive one. He will take whatever steps are needed to comply with applicable rules.

— In the meantime, the Vice President has sent a 7 dollar check to the Texas Parks and Wildlife Department, which is the cost of an upland game bird stamp.

The Wilsonizer who has a great bit of experience with firearms, shares his thoughts on the incident this weekend.

And, Scott McClellan got blasted by the press this morning about the hunting accident. Here is the transcript.

Gina Cobb says Cheney is the one under fire now.