But, British wiretap laws prevented his arrest and conviction!

Great Britain is struggling with its own wiretap controversy 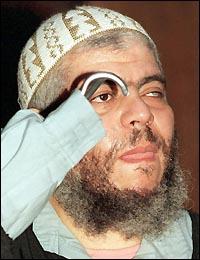 Scotland Yard and the Crown Prosecution Service faced mounting criticism yesterday for delaying action against Abu Hamza, who was jailed for seven years on Tuesday for soliciting murder and inciting racial hatred.

The revelation that Britain had detailed evidence alleging Abu Hamza’s direct involvement in terrorist kidnapping and murder, but was prevented from using it, will reignite the debate on intercept evidence.

But when Britain tried to move against the cleric in 1999, the case had to be abandoned because the evidence was deemed “inadmissible”. The FBI stepped in and said that if Britain could not use the incriminating material it would.

The US indictment against Abu Hamza alleges that he bought and supplied a $4700 satellite phone for the kidnappers and purchased $1100 worth of airtime for the device. It also states that Abu Hamza received at least three telephone calls from the gang leader before and during the kidnap drama in which four hostages were shot dead. He is also charged with sending recruits to al-Qa’ida camps in Afghanistan and trying to train terrorists in the US. 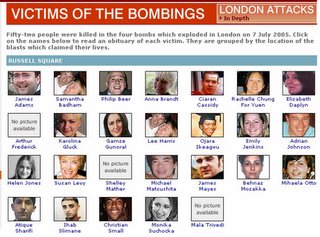 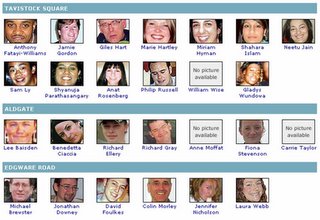 The British Sun is reporting on the extensive terror links of Abu Hamza, Osama’s man in Great Britain:

HATE-filled Abu Hamza turned the mosque where he held court into Osama Bin Laden’s British HQ, The Sun can reveal.

The preacher — caged for seven years yesterday — was at the centre of a web of evil that stretched around the world.

Killers linked to his stomping ground — the Finsbury Park Mosque in North London — have claimed more than 3,100 lives. Among the maniacs are:

* The FOUR London suicide bombers — led by the mastermind of the 7/7 atrocities Mohammed Siddique Khan and his cohort Shehzeed Tanweer.

* COP KILLER Kamel Bourgass — who murdered a detective as he tried to escape capture.

Hamza’s fellow preacher of hate Abu Qatada, often referred to as Bin Laden’s European envoy — and currently in custody — also spewed out his venom at the mosque.

What jurors at Hamza’s Old Bailey trial were not told was that when police raided the mosque three years ago they found a chilling haul of terrorist gear.

The stash included nuclear, biological and chemical warfare suits, replica pistols, a stun gun and a CS canister. Detectives suspect the material was used in terror training camps in the UK.

The mosque was used for at least four camps — which attracted more than 100 volunteers.

But when Britain tried to move against the cleric in 1999, the case had to be abandoned because the evidence was deemed “inadmissible”. That is really tragic news for the thousands of survivors left behind from his dastardly schemes.

Oh,… and The Sun is reporting that “Hook had a Hooker” and it pushed him to terrorism. (Via LGF and Beautiful Atrocities)

Jim Hoft
Jim Hoft is the founder and editor of The Gateway Pundit, one of the top conservative news outlets in America. Jim was awarded the Reed Irvine Accuracy in Media Award in 2013 and is the proud recipient of the Breitbart Award for Excellence in Online Journalism from the Americans for Prosperity Foundation in May 2016.
Dominion Employees Are Hiding at Home and Working Remotely -- Not a Peep from Trump-Hating Executive Eric Coomer
WOW! Elections Court Filing: Foreign Agents of Agressor Nations Had Access to US Voter Lists and Had Done So Recently
HUGE! Georgia Election Lawsuit: Dominion Software was Accessed by Chinese and Iranian Agents to Manipulate Election
Twitter Now Showing "Unsafe Link" Warning Messages for Sidney Powell's Website -- Blocks Americans from Seeing MASSIVE Voter Fraud
Happy Thanksgiving 2020
See more...