A Turkish movie featuring American actor Gary Busey as a Jewish U.S. army doctor who cuts out the organs of Iraqi prisoners at Abu Ghraib and sells them to wealthy foreign clients is breaking all box office records in Turkey,
MOVIE TRAILER HERE

One of the most vicious Anti-American films ever is already setting sales records in Turkey.

The American Thinker says it is, “Serving the Enemy on Film”:

Valley of the Wolves-Iraq has a Turkish intelligence officer hunting down US troops who allegedly murdered innocents in Iraq. It culminates with the evil Americans, played by Zane and Busey, being killed at the end in a dramatic shootout with the Turkish protagonists.

Busey’s role calls for him to use his histrionic talents to portray a Jewish doctor who works at Abu Ghraib and removes body parts from innocent Muslims to sell to recipients in New York. Busey’s career had already moved from being a “B” actor to a “D minus” one, but this latest project should finish his American career.

At least one can only hope so.

Zane who co-starred in the top grossing Titanic has found another sinking ship with this film and obviously couldn’t care less about his career. He has been appearing in more and more low budget films lately and has lost his once good looks along with his hair. Now he’s apparently going for personality defects as well. 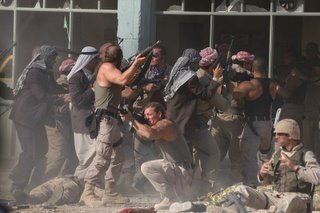 An op-ed in the New York Sun characterized the storyline as “Rambo as written by Jane Fonda and Michael Moore.”

The producers claim that the movie is based on fact:

The Busey character, listed only as The Doctor, is far removed from the Jewish stereotype in both appearance and manner, but hardly a credit to his heritage. At one point, he scolds American soldiers for shooting up the wedding guests “because it ruins their organs.” In another scene, a group of apparent organ buyers includes a man clearly dressed as an Orthodox Jew.

Even worse is the depiction of Zane’s character, Sam William Marshall, as a psychopathic Christian fundamentalist, who can be kind to an Iraqi one moment and then kill him instantly.

The two producers emphasized that they were against all forms of extremism, regardless of religion, and that most of film’s script was based on fact.

The movie owes most of its instant success to the fact that it is a spinoff from a television series of the same name, which has been Turkey’s top-rated show for the past three years. Nice.

Mac S. reports that at least one German theatre chain has yanked the movie.