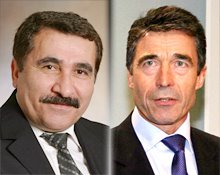 Denmark’s only Turkish MP Huseyin Arac (left) demanded the government of Denmark led by Prime Minister Anders Fogh Rasmussen to apologize for the Muhammad cartoons that were published in the Danish paper, Jyllands-Posten in September!

Via Peter at Agora…

The Danish government must distance itself from the Muhammed cartoons published in Jyllands-Posten and make an apology.

Otherwise, no bridge-building with the Islamic world is possible, says the official spokesman of the Turkish Foreign Ministry following the European Unions’ request for Turkey to act as a mediator.

“The Danish government ought quickly to announce that Denmark does not accept denigration of the Prophet Muhammed such as the cartoons in Jyllands-Posten gives voice to. Denmark should apologize for what’s happened and make it clear that the Danish government wants nothing to do with the cartoons.” So says Namik Tan, official spokesman of Abdullah Gül, foreign minister of Turkey.

He underlines that in the opinion of the Turkish government the cartoons have nothing to do with Freedom of Speech.

Long way to the EU

The spokesman of the Liberal ruling party, Jens Rohde, condemns the statement, saying that this will only make it more difficult for Turkey to act as a mediator and it will not be helpful if they want to be accepted into the EU.

The Brussels Journal is also carrying this news.

They must want to join the Club-EU after all!

Last week Ankara received a delegation of Palestinian Hamas leaders, who are still on the EU’s list of terror suspects. Mr Gül accused Turkish critics of the Hamas visit of “ignoring their country’s power and being oblivious to history.”

Rasmussen on Wednesday again defended the government’s handling of Denmark’s biggest crisis since World War II, including his decision not to meet the ambassadors of 11 Muslim countries who protested against the cartoons’ publication in a Danish newspaper in September.

More Turkey…
Pope Benedict XVI has condemned the killings of Christians in the Muslim world, while calling for more respect of religions and their symbols. At least two Catholic priests have been killed in the “cartoon” violence, one in Nigeria and one in Turkey.
Turkey’s #1 box office hit right now is the extremely Anti-American, Anti-Semitic movie “Valley of the Wolves, Iraq”.

Fausta has more from the Holy See.

Meanwhile, art historians agreed this week that depictions of Muhammad are neither new or rare and there is plenty of historical proof.