"The Road to Gitmo" Gets Rave Reviews in Berlin

“The point of making it [the film] is to remind people about how bizarre it is that somewhere like Guantanamo exists.”

Gee, after that comment, do you suppose the director gave this film a fair shake? 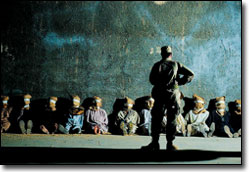 “We’re not trying to say Americans are bad… What we’re saying is that just the fact of Guantanamo’s existence is shocking and terrible and it shouldn’t be there.”

The film script was based on interviews with the so-called “Tipton Three” – Rhuhel Ahmed, Shafiq Rasul and Asif Iqbal – who were inmates at Guantanamo before being released in 2004.

The film critics have concluded that the film is factual and that Bush is a liar:

As a consequence of that exposure along with its Berlin Festival competition screening and any possible honors, the film should get wider international distribution than “In This World” received. The film certainly exposes the Bush Administration’s repeated assertions of their humane treatment of Islamic prisoners at extra-legal detention centers as a lie.

The inhumanity of American forces is “revealed” in the film:

The film mixes staged and archival footage with recreations of the interviews with the three surviving men. Annoyingly, film does come without a writing credit, presumably because interviews supplied the stories, but clearly someone structured the events.

Just after 9/11, Asif Iqbal (Arfan Usman) sets out for Pakistan to meet the bride his mother found for him. When his best man calls to say he can’t make the wedding, Asif calls another friend in England. Ruhel (Farhad Harun) agrees to be best man and he flies out with two other friends, Shafiq Rasul (Rizwan Ahmed) and Monir Ali (Waqar Siddiqui).

With some time on their hands, the four men visit a mosque and hear an Iman’s call for men to travel to Afghanistan to give aid to the people. Foolishly, they jump on a bus headed for the border. They arrive in Afghanistan just in time to see the first American bombs hit. At one point during the chaos, they get separated from Monir, who is never heard from again.

The others are captured by Northern Alliance troops and shipped in containers where many die, before being turned over to U.S. forces December 28. They are beaten and tortured by American soldiers when they insist they are not terrorists or fighters. When one interrogator asks in all seriousness for the whereabouts of Osama Bin Laden, this provokes laughter in the theater that makes you want to weep: Is this what has become of U.S. intelligence?

So after 9-11 these young Muslim men travel to Pakistan for a wedding, one for a cheap Microsoft class in Pakistan(?), they all disappear and then just happen to show up in Afghanistan. And, this is not supposed to look suspicious?

The film doesn’t really plead a political cause or moral crusade as show in persuasive dramatic terms what happened to these lads. It makes no attempt to enlarge the story beyond these men or to verify any of their claims. Continually, President Bush refers detainees at Guantanamo as “bad people.” Clearly, these three were not. 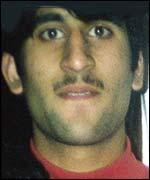 But, here is what was reported when the family first heard that Shafiq Rasul was captured and held by Allied forces:

He travelled to Pakistan in October of 2001, apparently for a Microsoft computer course as it was cheaper than doing it in the UK(?)

Every week he spoke to his family in Tipton until December when they lost contact.

The family had tried to call Shafiq to tell him about his nephew’s death but were unable to talk to him.

On Monday last week (January 2002), they received a call from the Foreign Office informing them of his capture. The news shocked the family. Their boy, who they say had never expressed radical beliefs, was being branded a terrorist.

How or why he ended up in Afghanistan remains a mystery to them.

The ex-Gitmo detainees have written about the horrible abuses they endured during their days of confinement up until their release. They are currently in Germany to help promote the Anti-US film.

Back on December 1, 2005, the the most senior American military officer in Iraq, Peter Pace said the US had a distorted picture of events in Iraq including Iraqi troop readiness. The White House also said that it would communicate more with lawmakers about Iraq and the War on Terror. This would be a great opportunity for the US Military to do just that and set the record straight.