Is Russia being PC or just putting the clamps down on dissent? 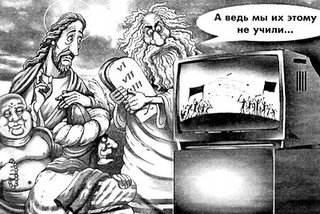 “We did not teach them to do it!” is the caption to this cartoon that was blamed for the closing of a Volgograd newspaper. (Image from www.rusnord.ru)

Russia shuts down newspaper after it prints a offensive cartoon:

Russian free speech advocates have accused officials of using the worldwide uproar over cartoons of the Prophet Muhammad as an excuse to shut down a regional newspaper and ingratiate themselves with the Kremlin, Reuters reported.

Authorities in the southern city of Volgograd on Thursday ordered the closure of the newspaper, which is owned by City Hall, after it printed a cartoon depicting the Prophet alongside images of Jesus, Moses and Buddha.

“(This is a) master class in how to close down an innocent newspaper in two days,” Alexander Brod, head of the Moscow Human Rights Bureau, told Ekho Moskvy radio station.

President Vladimir Putin has initiated a campaign to combat racism and religious intolerance in the multi-ethnic country, a theme picked up enthusiastically by United Russia.

Robert Mayer at Publius Pundit as a more in-depth analysis of this latest cartoon controversy.

And, as a tool for you to check yourself for cartoon instability,… Dr. Sanity put together a terrific checklist of cartoon insanities for the week.