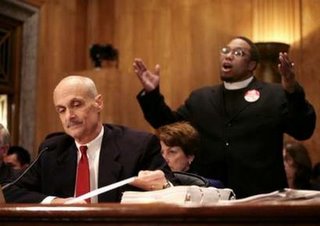 Progressive Democrats of America Board Member Rev. Lennox Yearwood Jr. gave this talk to college students at Howard University before the Million More March in Washington DC in October:

The African-American community has an important role to play in the task of peacemaking in countering this unjust war, despite the fact that African Americans are most often merely the victims of white violence, and thus not highly visible in antiwar protests.

African Americans are not surprised by the unjust war nightmare that has been created. Yes, there is a form of Hip Hop called “gangster rap,” but this is one of most gangster administrations ever in the history of American society. That is why people of color unfortunately are seldom found in the crowds protesting this unjust war.

When physical survival is a daily task in which the odds are against you because the nation in which you are a citizen has defined you as the enemy, there is little motivation to protest against an unjust war that your enemies have created, especially when the people protesting look like your oppressors and do so little to connect justice with peace issues.

But this can no longer be our excuse. One of my best friends in the movement is Cindy Sheehan, the mom who with courage–beyond courage– stood at the gates of the President’s vacation home in Crawford, Texas, and demanded to know, “What noble cause did my son die for?” Cindy Sheehan who has become the Rosa Parks of the antiwar movement, Cindy Sheehan my comrade in the movement.

The Hip Hop community must be at the forefront of the antiwar movement, because it is the poor people of this country and the people of color who are fighting this unjust war.

In a letter at Democrats.com the Rev. Lennox Yearwood Jr. wrote about “overrunning” the government:

It is time for all of God’s children, black, white, yellow, and brown, straight, gay, male, and female to come together to fight for justice once and for all.

One last line of propaganda from the Reverend at The Backbone Campaign:

Two tragic examples of racism in 2005 in our country are Americans’ continued acceptance of the death penalty, and the federal government’s abandonment of poorer evacuees during and after the Hurricane Katrina disaster in New Orleans.