Former Democratic Attorney General Ramsey Clark took time off from defending the “Butcher of Baghdad”, mass murderer and tyrant Saddam Hussein, to go march with the communists in Bulgaria on Saturday.

The protest against a proposed US military base in Bulgaria could only muster up around 100 supporters but they could count on democrat Ramsey Clark to be there to lead the parade. 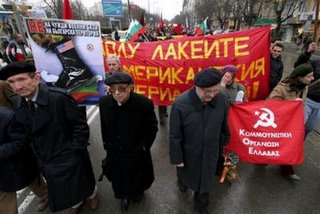 Their is no word on if Ramsey helped carry the hammer and sickle banner during the march.

Ramsey was back focusing on Saddam’s defense after the march. Ramsey Clark claims the judge is biased against Saddam because he is from Kurdistan where Saddam slaughtered thousands of innocents:

The defence claims Abdel Rahman is biased because he is a native of the Kurdish village of Halabja, the target of a 1988 chemical attack in which some 5,000 people, including women and children, were killed.

Since the stern Abdel Rahman took over as the chief judge of the trial, Saddam has often been locked in heated verbal exchanges with him, often plunging the sessions into chaos.

During the February 14 session as the judge pounded his gavel to restore order, Saddam told him to “take that hammer and knock yourself on the head.”

At a January 27 hearing, Abdel Rahman ejected Saddam’s half-brother and co-defendant Barzan al-Tikriti for disruptive behavior, an action that led to a walkout by the entire defense team

Prosecutors at Saddam Hussein’s trial presented a document Tuesday they said was signed by the former leader approving the executions of more than 140 Shiites in southern Iraq after an assassination attempt in the 1980s.