Over 130 people have been killed across Iraq from sectarian violence since the Golden Mosque blasts, but protests have spread beyond the Iraqi border… 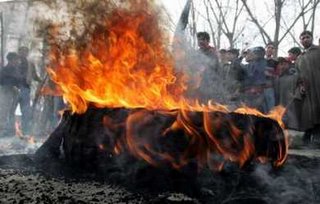 At least one Arab paper is blaming the Americans for the blast. 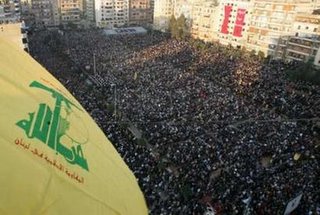 On behalf of the American people, I extend my deepest condolences to the people of Iraq for the brutal bombing of the Golden Mosque in Samarra, one of the holiest sites in Shi’a Islam. The terrorists in Iraq have again proven that they are enemies of all faiths and of all humanity. The world must stand united against them, and steadfast behind the people of Iraq. This senseless crime is an affront to people of faith throughout the world. The United States condemns this cowardly act in the strongest possible terms.

I ask all Iraqis to exercise restraint in the wake of this tragedy.

The blast sharpened long-standing animosities between Shiite and Sunni Muslims across the region. 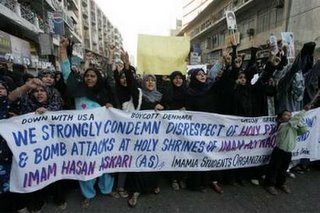 Pakistani Shi’ite Muslims chant slogans during a rally in Karachi February 23, 2006. The Imamia Students Organisation held the rally to denounce the bombing of the Golden Mosque in Iraq and to protest against the publication of cartoons depicting Prophet Mohammad in European newspapers. (REUTERS/Zahid Hussein)

President Bush offered to help rebuild the Iraqi Shrine and Iraqi President Talabani offered his own money to help with the project. 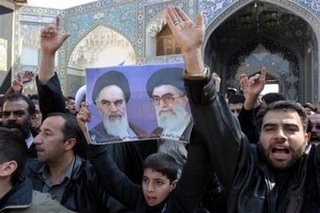 Iraq the Model is reporting on the situation.
Pajamas Media has reaction to the bombings and aftermath.
Neo-Neocon has reaction to the civil war predictions.
Strategy Page has a great analysis of the situation within Iraq.
Robert Mayer at Publius Pundit looks at the politics behind the shrine attacks.
My Other Fellow reports on the three Sunni journalists that disappeared near the shrine.

Previously:
Looking for Signs of an Iraqi Civil War