The Polish Foundation of St. Benedictus introduces its “Martyrs of our Time” ad campaign this week.

Poland is no France…
No rationalizing or mollifying barbaric behavior in Krakow!

Here are a few of the moving posters that will be placed in public transportation vehicles in Poland for the campaign. 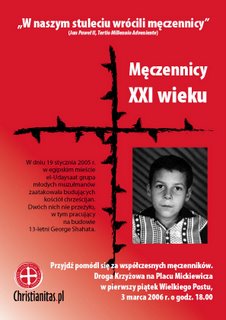 This is an action that was conducted in one of the major Polish cities – Poznan. The action was started by the Foundation of St. Benedictus and was approved by local government. The Foundation’s director is Zbigniew Czerwinski who is also member of PiS and president of the Regional Council. 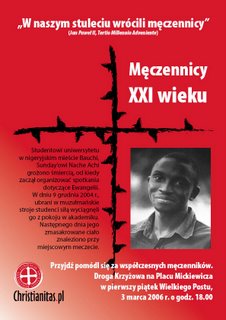 Nache Achi was killed by Muslim fundamentalists in Africa.

PiS is now also the ruling party in Poland. PiS means in Polish “Law and Justice”. It’s a right-wing conservative party. Also, Polish President Lech Kaczynski is from PiS. Action was started in Poznan with posters of people killed by Muslim Fundamentalists (Andrea Satoro is also among them). 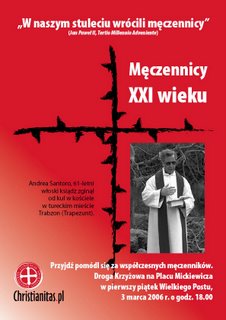 Andrea Satoro, a Christian priest who was killed by a Muslim fanatic in Turkey.

These posters are being placed in vehicles of local communication service. This action in the next few weeks will also take place in other Polish cities, including the Polish Capital of Warsaw. 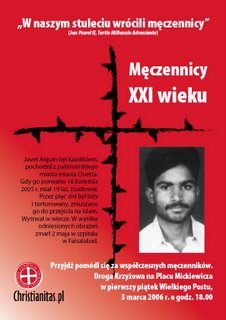 Javet Anjum was a Christian and was killed by Muslims because he refused to convert to Islam in Pakistan.

FaithFreedomOrg discusses the campaign.
Eurojihad.org has more posters from the campaign.
Freedom for Egyptians weighs in with a heavy heart for the young Egyptian Copt.
Canadian author and blogger, Deborah Gyapong says “Christophobia” is the real persecution.
The Real Ugly American says to “Keep Your Eyes on Poland.”