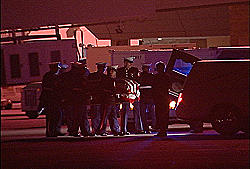 Here is a moving story that was posted as a comment by Deborah “Debbi Dodah” McKay, the Tennessee Ride Captain for the Patriot Guard Riders, on another successful Patriot Ride:

Tuesday was a situation where I felt out of control. I had seven people meet me at Chilhowee Park, here in Knoxville, as we had been informed that Corporal Rusty Washam of Huntsville, Tennessee would be arriving around 1:30 p.m. EST. We were ready to go, and then I got a phone call. Rusty would not be arriving until 8:30 or so that evening. I was disappointed, but understood. I had seven individuals waiting for word, and ready to leave from places like Kentucky, Illinois, Virginia, Johnson City, Tennessee and Maryville, Tennessee. I know the great distances these people rode/drove to arrive, only to find out we were 7 hours early. The weather was not great either, however, the majority of them showed up on motorcycles ready to escort Rusty on his last ride home.

Four of us remained and were present when the airplane finally landed carrying Corporal Washam and his brothers. When we arrived, there were a bus load of individuals from Scott County; I would presume most of them were family. All of them departed from the bus to go to the outside terminal to await their loved ones. It was an emotional time, I was feeling pain for Mrs. Washam, Rusty’s mother, and you could see the pain in the face of his father, but he had to be strong for his wife. Rusty’s wife came, I believe, with her parents, it was heart-wrenching to see the pain this young woman had in her heart; she couldn’t have been more than 20 years old, a widow, and the mother of two young children. And one tall young man approached each one of us, reaching out to shake our hands, and tell us how honored he was. I could not help myself, but gave this young lad the hug he genuinely needed. I later discovered that this young man was a cousin to Rusty and was deeply distraught.

When the time came for us to depart the airport, Airport Security cleared the lanes for us to leave. The Sheriff of Scott County, himself, was present to lead us back to Huntsville for what was called Rusty’s Last Ride Home. I briefly spoke with him, and you could tell that there, too, was great pain in his heart. 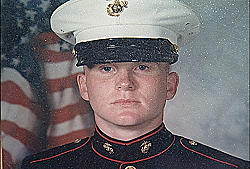 Including the bus, there were ten vehicles, and one lone motorcycle, with our Randy Smith, from Mount Vernon, Illinois, a fellow member of Patriot Guard Riders and an American Legion Riders Post # 141, riding it. The temperature was slowly creeping to the low thirties; there is no telling what the wind-chill factor was. I quickly thought to have Randy to ride behind the bus, in hopes that it would break some of the wind from him so it would not be such a cold ride.

We got to the Interstate to take the 60+ mile ride back to Huntsville, and everything was going fine, except some people passed us like we were standing still. In my opinion, this is so thoughtless for these people to not have any respect for those who lose their lives to keep the freedoms that the protestors take for granted. This angered me deeply, until we got to the Knox County/Anderson County line, whereupon one individual, not with the original group leaving the airport, decided to take it upon himself to block traffic from passing us. You could see headlights in both lanes behind us for what appeared to be miles. But alas, our knight in shining car parts had to leave the Interstate, and that is where more thoughtlessness began. But all was not lost. A lone Tennessee Highway Patrolman nabbed the first person to sneak through, and followed him/her until they got off at the exit. Since I was behind them, I would imagine that the trooper had a few words to say to the operator of that vehicle on his loud speaker. The lone State Trooper stayed with us until we arrived in Huntsville. 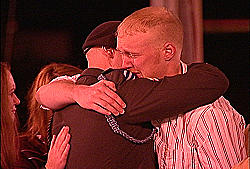 Erian Washam was there to greet his brother, Cpl. Rusty Washam, when his plane landed in Tennessee.

Time came for us to get off at the Huntsville exit, where, to my surprise, there was several patrol officers (I would imagine from Oneida (city), Scott County and Campbell County) were sitting there waiting for us. Also present were four fire trucks and a couple of ambulances. Allowing them into the flashers on motorcade, we were next to the last in line and had one lone vehicle behind us, we continued on.

The next 19 miles were the most awesome 19 miles I have ever traveled. By this time it was nearing 11 P.M. The closer we got to Huntsville, the more people we see lined up on the sides of the roads holding flashlights and candles. When we passed them, they joined in at the rear of the motorcade. Signs posted every 100 feet or so showing support for the family, exclaiming that Rusty was their hero, thanking him for his greatest sacrifice, thanking the family for the sacrifices they too, had made. Got to love those Tennesseans!

All flags along the way were flying at half mast. The line of cars behind us was growing in leaps and bounds; it seemed as if there was no end to the procession. People lined the streets for what seemed to be miles. It was as if the entire population of Scott County, Tennessee was at the disposal of the Washam family. And the children of these residents were present as well. Scott County High School, where Rusty graduated from was full of students, each holding a candle or a flashlight. I was completely awestruck. I’ve never, in my entire life, ever, seen anything like this. And believe me; I’ve been to plenty of military funerals since the war in Iraq began. It is a time I will never forget in my life, and I thank you, Jeff Sanders, Tennessee State Director for the Patriot Guard Riders, for giving me this opportunity to see what an outpouring of support one family had during their time of sorrow.

When we arrived in Huntsville, it was then that Kris reminded me that we had been there one time for a Veteran’s Day parade, mourning the loss of residents who had fought in wars past. We were present for the dedication of a memorial they had built to honor these lost loves. I would imagine that Rusty’s name will be on that wall before spring.

Stories about what the Patriot Guard has accomplished can be found on their website at www.patriotguard.org. Yesterday, Tuesday, February 21st, however, the website crashed due to the influx of requests to view the site. However, today, Wednesday, February 22nd, the problems appear to be cleared.

The Patriot Guard Riders are invited guests of the families of these individuals of whom we support.

Thank you, Debbi, and all of the Patriot Guard Riders, for your great work and sacrifice. Thank you for supporting our American heroes!

The Anchoress has the story of an American-Indian hero tonight.
Michelle Malkin has another sad story… “Daddy is Gone.”