Pakistani "Bounty" Cleric Has Been Special Guest at US Events

Qureshi has admirers in upstate New York. He traveled there in 2002. 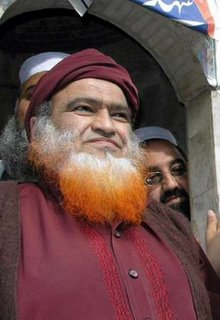 A Pakistani cleric Maulana Yousef Qureshi seen during a demonstration in Peshawar February 17, 2006. In the northwestern Pakistani city of Peshawar, cleric Qureshi said he had personally offered to pay a bounty of 500,000 rupees ($8,400) to anyone who killed a Danish cartoonist, and two of his congregation put up additional rewards of $1 million and one million rupees plus a car. (REUTERS/Ali Imam)

A Muslim Cleric set a bounty on the Danish cartoonists of half a million rupies, translating to around a $8,400, for their murder last week:

In the north-western Pakistani city of Peshawar, Maulana Yousef Qureshi said he had personally offered to pay a bounty of 500,000 rupees ($8400) to anyone who killed a Danish cartoonist, and two of his congregation put up additional rewards of $1 million and one million rupees plus a car.

“If the West can place a bounty on Osama bin Laden and Zawahiri, we can also announce reward for killing the man who has caused this sacrilege of the holy Prophet,” Qureshi told Reuters, referring to the al-Qaida leader and his deputy Ayman al-Zawahiri.

Jay at Stop the ACLU reported that the cleric had spent time in upstate New York. He was invited to Ramadhan there by local Muslims in 2002:

Nightly, following the Salat Traweeh, listen to the renowned Islamic Scholar from Peshawar, Pakistan, MAULANA YOUSEF QURESHI. The Maulana will be at the MDQ New Mosque for the remainder of the most Blessed RAMADHAN. The Maulana is very well known in Pakistan, especially in the NWF. He is presently the KHATEEB at the famous MASJID MUHABAT KHAN in PESHAWAR.

Cleric Maulana Yousef Qureshi obviously did not hire the same PR consultants that Hamas did before the Parliamentary elections in January, 2006, as reported at Bloghead:

· Say you are not against Israelis as Jews

· Do talk about Palestinian suffering

Although, not all members of Hamas, including parliamentarian Abu Tir, heeded the consultant’s advice. 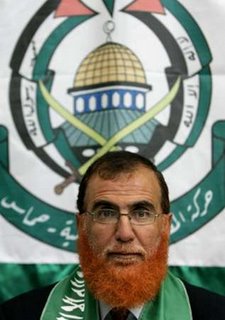 But, it does not prevent Abu Tir from roaming freely within Israel:

Eldad asked Shin Bet chief Yuval Diskin why his agency was not limiting Abu-Tir’s freedom of movement in Israel. Diskin responded that Abu-Tir does not carry a card saying he’s a Hamas terrorist. Eldad retorted, “Stupidity and naivete have no borders.”