“These are our folk heroes. It just seems silly to chase around the Riddler when you’ve got Al Qaeda out there.” 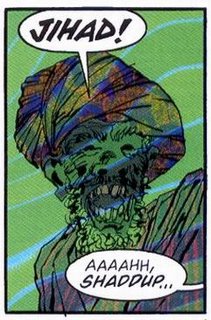 It was announced this week at the Wonder Con Convention that Frank Miller is working on a new graphic novel, entitled Holy Terror Batman. Miller has 120 pages inked out of 200 pages. The basic story, according to Miller, is “Batman kicks Al-Qaeda’s ass.” Miller calls it a “propaganda piece.” He said, “Be afraid, very pulpy, mature, best artwork I’ve done, deliberately raw.”

Miller on Batman and his methods:

“Batman is a dick. He dresses up as a bat and throws people through windows. Smartest superhero on Earth.”

Why should people like Batman if he’s a dick? “Because he’s our dick. If you’re in a dark alley with a bunch of thugs with knives, you want Batman to show up. You don’t have to have dinner with him.”

Super Heroes have a history of battling America’s enemies in the Propaganda Wars:

It’s been a long time since heroes were used in comics as pure propaganda. As Miller reminded, “Superman punched out Hitler. So did Captain America. That’s one of the things they’re there for.” 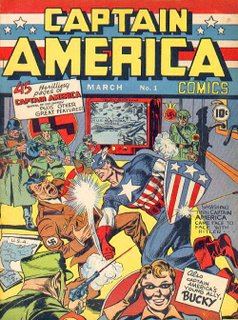 There are right-wingers concerned about the final Miller product since he has a history of leaning left. But as Brainstar explains:

It’s possible that Miller’s a 9-11 Democrat, as Hugh Hewitt likes to describe them, someone who had the scales fall from his eyes as the towers pancaked to the ground. I did not detect any overt political messages in the more recent All Star Batman and Robin.

And, a commenter at Brainstar posted an earlier Miller quote that may calm conservatives:

Troublesome as the so-called Religious Right can be, they’re generally a pretty clumsy bunch. They swing a club. ‘Liberals’, on the other hand, use a scalpel, and only after they’ve applied intellectual anesthetic. Any pain is felt much later. This makes them much more dangerous censors. Especially since most artists tend to be vulnerable to their anesthetic. The most palpable threat to free speech these days comes from the secular political left. Janet Reno, Paul Simon, all those little ‘politically correct’ fascists that haunt our universities, preaching that the purpose of fiction is not entertainment, but rather indoctrination. These shameless, lying, whiny scumbag baby boomer, sixties-generation spoiled brats who think they serve society by rewriting history and trying to unravel our language…they represent a much more effective and successful effort to shut down free speech and the free press than the Bible-bangers ever have.”

We’ll all know when it is published. 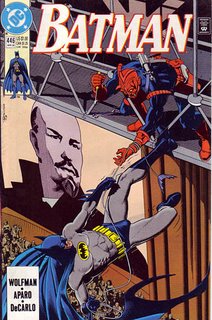 Batman has been busy himself battling the evils of communism.
(Atakra)

Super Fun Power Hour (the #1 blog in Latvia) is an expert on the comic book world.

A commenter at Super Fun Power Hour reminds readers of the famous Superman “Slap a Jap” cover back during World War II.

Brainstar is the expert and has much more on the comic jihad.