Nigerians Rampage with Machetes After Koran is Desecrated

Nigeria confirms that 35 persons were killed, 30 churches and five hotels were also burnt in violence the past three days.

For the third day in a row, Nigerian Muslims rampaged through the streets leaving 13 dead on Monday in Bauchi after at least 25 reported deaths in two previous days of violence. 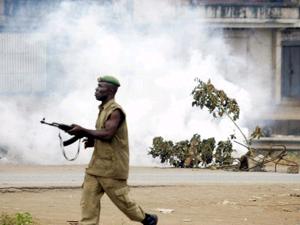 The Red Cross put the death toll in Maiduguri and Katsina at 28, but the Christian Association of Nigeria said it had counted at least 50 dead bodies in Maiduguri alone.

Monday’s death count reached at least 13 with two more churches torched after an argument between a teacher and a pupil over the confiscation of a Koran in school:

…But rumours swept the city that the book had been desecrated and that was the cue for youths, some armed with machetes, to rampage in the streets.

Reports say two churches were burnt in Bauchi before police fired tear gas and live rounds to disperse the crowd.

The state governor and senior security officials in the state are meeting to discuss security and consider whether to hold an inquiry into the incident.

The Red Cross say they have recovered 13 bodies but this may rise as they hope to recover more bodies.

The riot was not directly related to the violence over the weekend in the two northern towns of Maiduguri and Katsina, which began as demonstrations against the Danish cartoons of the Prophet Mohammed. 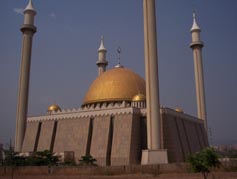 The central mosque in Abuja, the capital of Nigeria.

Nigeria’s unrest this week is the most violent seen since the cartoon protests began:

Nigeria’s unrest was the bloodiest and most sectarian yet seen, with crowds in the mainly Muslim north turning on the Christian minority.

In Maiduguri, the capital of the state of Borno, Muslims turned on local Christians after police broke up a rally against the drawings, burning shops and churches and killing 15 people, police spokesperson Haz Iwendi said.

At the same time, in the city of Katsina, police opened fire into a crowd of stone-throwers, killing one and injuring others, he said. Churches were also burned in Katsina, he added, but could not say how many. 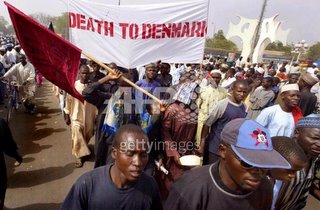 Kano, in northern Nigeria, is often the scene of unrest and tensions in the sprawling trading centre have been further stoked by accusations from federal officials that the local state government is training a Jihadist militia. (Getty)

There are gruesome reports of Christians being burned to death in their churches over the weekend:

Initially published in a Denmark newspaper in September the cartoons ? one depicting the Prophet wearing a turban resembling a bomb ? sparked outrage among Muslims worldwide. Muslims say that the caricatures are blasphemous as Islam bars all images of Muhammad, and that the images associated Islam with terrorism.

Usman said when the protesters attacked he called the police on the phone for help but was told they did not have enough officers to respond.

Update: (Tuesday AM) The Christians are now attacking Muslims in southern Nigeria. This news did make ABC and the PhillyBurbs.

History News Network has more on how the appeasement and the silence of the MSM is contributing to death.

Rantings of a Sandmonkey reports that there were “clashes” with Christians in Egypt over possible church construction which is forbidden.