“One group threw a tyre around one man, poured gas on him and set him ablaze.”
–BBC–

A Catholic Priest and 3 children are among the dead! 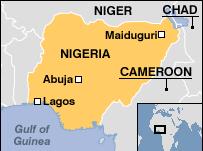 Sixteen people have been killed in northern Nigeria during protests by Muslims over cartoons! (BBC)
The AP is reporting that 15 churches were burned in the mainly Muslim region.

The rioting Muslims stormed through the streets for three hours before police restored order:

It was the first major protest to erupt over the issue in Africa’s most populous nation. An Associated Press reporter saw mobs of Muslim protesters swarm through the city center with machetes, sticks and iron rods. One group threw a tire around a man, poured gas on him and set him ablaze…

Chima Ezeoke, a Christian Maiduguri resident, said protesters attacked and looted shops owned by minority Christians, most of them with origins in the country’s south.

“Most of the dead were Christians beaten to death on the streets by the rioters,” Ezeoke said. Witnesses said three children and a priest were among those killed…

With Saturday’s deaths, at least 45 people have been killed in protests across the Muslim world, according to a count by The Associated Press.

African News Dimension (AND) Network reported that a Catholic priest and children were among the dead:

Witnesses said three children and a Catholic priest were among those killed. Nigeria, Africa’s most populous country of more than 130 million people, is roughly divided between a predominantly Muslim north and a mainly Christian south. Christians are a minority in Maiduguri.

“They entered our house some 20 minutes ago, broke our windows, smashed doors and threw our things all over the place,” an undergraduate student of the University of Maiduguri, the capital city of Borno state, said. 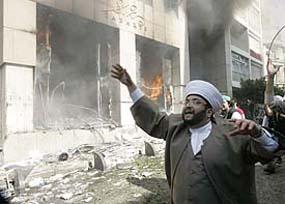 Muslims rioted for three hours before police and troops restored order. (AND)

Reuters reports that some of the deaths even occurred inside the churches!!

“They went on the rampage, burning shops and churches of the Christians. The protesters killed the others. Some were even killed in the churches,” said Joseph Hayab, north-west secretary of the Christian Association of Nigeria (CAN).

This is not good at all. 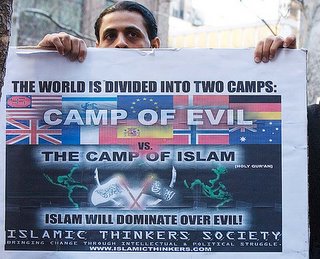 American Digest posted this protest picture from the New York protest among many others.