“The Republican Party would have the American flag and the swastika flying side by side.”

John Stephenson has the story on Julian Bond’s latest talk to university students in Fayetteville, NC.

Freshmen were required to attend the NAACP Chairman’s talk! 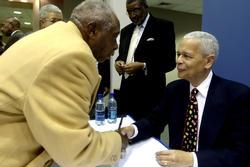 Bond spoke for 45 minutes, and his speech was interrupted several times by applause as he jabbed at the Bush administration. Bond’s address was part of FSU’s Distinguished Speakers Series and helped kick off Black History Month.

“We have a president who talks like a populist and governs for the privileged,” Bond said.

Bond said civil rights is not an issue for black people only.

By 2050, blacks and Hispanics will make up 40 percent of the nation’s population, he said. “Wherever there are others that share our concerns and conditions, we need to make common cause with them. At the National Association for the Advancement of Colored People, we believe that people come in all colors. Anybody who shares our values is more than welcome.’’

FSU Chancellor T.J. Bryan estimated that 900 people attended the speech. Freshmen, who were required to attend, filled the balcony of Seabrook Auditorium.

News 14 carried VIDEO of his visit to the area but did not think that his comparing the GOP to Nazis was newsworthy(?)

Bond argued that the Bush administration uses Colin Powell and Condoleezza Rice as “human shields” against criticism on human rights issues. He added that, in actuality, the administration’s “idea of compassion is to say ‘Brownie, you’re doing a heck of a job.'”

In June 2004, Julian Bond compared Republicans to the Taliban.

It’s a shame Julian Bond won’t share with his crowds the gains blacks and minorities have made during the Bush years.