Not all Danish Muslims are pushing fake cartoons in the Middle East. 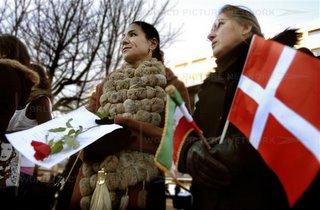 In a show of support to Danish people, local Iranians demonstrate in front of Town Hall in Aarhus, Denmark, the home town of Jyllands-Posten, on Saturday, Feb. 11, 2006. (WPN)

This protest in Aarhus is reminiscent of a counter-protest in support of Denmark this past weekend in Paris.

The Radical Imams behind the cartoon riots were not invited to the prime minister’s official residence even though they admitted to “one-third” of the blame for the violent protests.

Most Danes hold the radical Imams responsible for the cartoon protests. 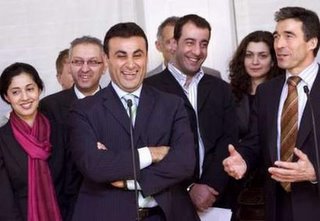 Naser Khader (3rd L), Danish MP for the Social Liberal Party, and Danish Prime Minister Anders Fogh Rasmussen (R) laugh with members of the ‘Democratic Muslims’ at the prime minister’s official residence in Marienborg, some 15 km (9 miles) north of Copenhagen, February 13 2006. Khader was invited to the meeting with 21 other members of the newly founded Danish organization ‘Democratic Muslims’ of which Khader is the spokesman. (REUTERS/Keld Navntoft)

The Brussels Journal notes that more Muslims are joining the moderate network. Danish Centrist lawmaker Naser Khader requires police protection but still is willing to mobilize the majority of the moderate Muslims in Denmark despite the threats on his life.

Meanwhile, Iranians back in Tehran renamed pastries “Roses of the Prophet Mohammad.”

And, Slapstick reports that the a suggested Islamic Textbook Committee has been proposed to cleanse European textbooks of material “offensive” to Muslims.