Now… Danes are being threatened with the same fate as Theo Van Gogh!
(via Free Republic) 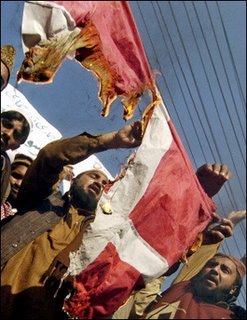 Pakistanis shout anti-Danish slogans during a demonstration in Lahore. Pakistani Islamists chanted “Death to Denmark”, burned an effigy of the Danish prime minister and torched Danish and French flags to protest against cartoons portraying the Prophet Mohammed.(AFP/Arif Ali)

It makes you wonder if the crowds at these protests will ever get the real story about how a Danish Imam was showing fake unpublished cartoons on his “cartoon outrage” tour of the Middle East. 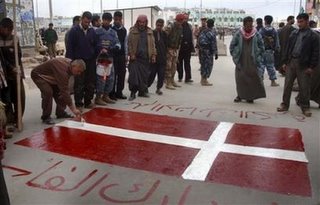 Iraqi Shiite Muslims paint a rendition of the Danish flag to protest on top of for the country’s publication of a cartoon of the Muslim prophet Muhammad, Thursday, Feb. 2, 2006, in the holy city of Najaf, 160 kilometers (100 miles) south of Baghdad, Iraq. (AP Photo/Alaa al- Marjani) 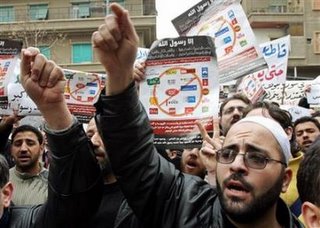 Syrians shout during a sit-in protest in front of the Danish embassy in Damascus, February 2, 2006. (REUTERS /Khaled al-Hariri) 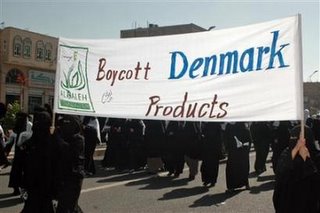 Yemeni women protest against a series of cartoons of the Prophet Mohammad published by Denmark’s Jyllands-Posten newspaper in Sanaa February 1, 2006. (Khaled Abdullah/Reuters) 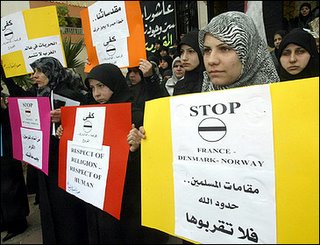 Muslim students hold up signs calling on people to respect the holy figures and of Islam, during a protest in Saida, Lebanon. (AFP/Mahmoud Zayat)

It took a good four months for the controversy to hit our shores (thanks to some encouragement from across the causeway- Imam Ahmad Abu Ladan ), and now everyone on the island is going crazy. I expected that our ever-efficient Parliament would react the way it did…

The funniest thing is that they cut their holidays short to hold an emergency session even though the cartoons are four months old!

Much of the Muslim world aren’t fully aware of the relationship between the press and the state in Denmark.

Here in Bahrain, as in many developing countries, the state keeps a watchful on eye everything that is printed in the newspapers. In some cases the line that separates the state and the press is very very blurry indeed. On the other hand, in Denmark and much of Europe, the state and the media are strictly independent. Maybe people here in the Muslim world are mistakenly assuming that what applies at home applies everywhere, and therefore they hold the Danish state responsible for everything printed in the Danish press.

US CAIR Representatives are meeting with the ambassadors to Norway and Denmark:

Ibrahim Hooper, spokesman for the Council on American-Islamic Relations (CAIR) in Washington, said his group sought the meeting with ambassador Knut Vollebaek to try to defuse mounting controversy over the cartoons.

“Our message to the ambassador is that we should just respect one another and avoid situations where we intentionally seek to provoke and where freedom of speech is abused to defame or to mock,” Hooper said ahead of the meeting.

There are several protests planned for Friday including a “Day of Anger” planned by London Muslims.

The Anchoress covers this and everything else you need to know about this controversy this morning.
Michelle Malkin has more on the State Department’s response.
The newspaper editors are now being targeted.