Imam Ahmed Akkari, the spokesman for the Danish Imams who peddled “fake” cartoons on the Middle East tour to build animosity against Denmark, is serious about Sharia.

He beat a young child senseless for accidentally touching a girl’s headscarf while playing run and catch! 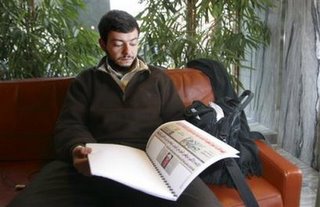 Imam Ahmed Akkari displays a pamphlet Wednesday Feb. 8, 2006 in Copenhagen, Denmark that he took to the Middle East last year. The Associated Press protested Wednesday the misleading inclusion of an AP photograph in the pamphlet purporting to show images offensive to Islam. The AP picture within the pamphlet shows a bearded man wearing fake pig ears, a pig nose, and a pink embroidered cap on his head. He was wearing the costume while participating in a pig-squealing contest at an annual festival in a farm village in southern France last summer. (AP Photo/John McConnico) ** It was Dennis Nixon at Neander News Blog that broke the hog-calling story. **

Freedom for Egyptians, who earlier printed photos of the Danish cartoons from an October issue of Al Fager newspaper in Egypt before the January protests, reported on Imam abuse this week from a translated article at Jyllands-Posten:

According to the famous Danish newspaper Jyllands-Posten, the spokesman of the extremist Imams in Denmark, Mr. Ahmed Akkari, violently attacked a 10 to 11 year old pupil while training to become a teacher at Lykkeskolen in Aarhus. The episode, that took place some years ago, was reported to the police by the school, and Mr. Akkari was sacked immediately and forbidden future access to the premises of the school.

Mr. Akkari attacked the boy, during a run and catch game, when the boy touched the headscarf of a girl so that her hair got exposed. Mr. Akkari knocked the boy to the ground and several times hit him in the chest with his fists, completely loosing his self control.

In other Danish Cartoon news:

Free Thoughts notes how the Danish paper Jyllands-Posten is not backing down.

Alphabet City has the translation of the jihadist conference attended by Abu Laban that was broadcast on Italian TV, courtesy of Laura Mansfield.

Jyllands-Posten reported today that Iraq has asked Denmark to keep its forces in country to help with security:

Danish troops’ uncertain status in Iraq appeared to be resolved Wednesday evening after the Iraqi government told Foreign Minister Per Stig MÃ¸ller that it wanted the troops to stay in Iraq.

And, a group of Arab Muslims has set up a website apologizing for the violence over the Muhammad cartoon publications. The site is called “We are sorry from Denmark-Norway.”

Bill Clinton again today told an audience in Pakistan that the cartoons were a mistake.

Michelle Malkin has a big roundup on the Pakistani Cleric who is offering a million dollar reward to kill the cartoonists.