“We want to make sure that [the government] does not negotiate with murderers and that terrorism is not seen as a way to achieve a political end.”

Irene Villa
ETA bombing victim
She lost both her legs in an Eta bombing 15 years ago. 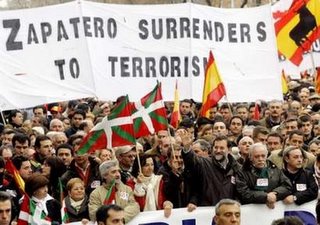 Mariano Rajoy, leader of the opposition, waves to supporters during a demonstration in central Madrid to protest against the government’s policies regarding anti-terrorism February 25, 2006. (Reuters)

Tens of thousands of Spaniards protested against the Zapatero government’s anti-terrorism policies:

Crying “Zapatero, resign!”, referring to Prime Minister Jose Luis Rodriguez Zapatero, marchers mobilised by the Association of the Victims of Terrorism (AVT) waved placards scrawled with “Not in my name!” and “Memory, dignity and justice”.

Others in the demonstration, which also had the support of the right-wing opposition Popular Party (PP) and the Catholic Church, bore large photos of some of the 800 people killed by ETA during its 40-year campaign to establish a Basque state in northeast Spain and southwest France.

The PP-led Madrid government said 1.4 million people turned out for the two-hour demonstration, more than 10 times the police estimate of 110,000. 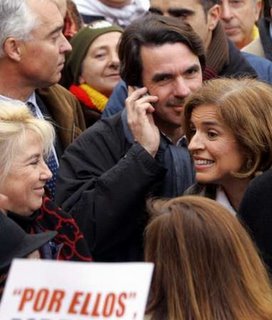 Former Spanish Prime Minister Jose Maria Aznar talks on a mobile phone as he walks next to his wife Ana Botella (R) during a demonstration in central Madrid to protest against the government’s policies regarding anti-terrorism February 25, 2006. (REUTERS/Andrea Comas)

There was a bitter battle in parliament this week over Zapatero’s policies. Zapatero, backed into a corner, resorted to the ol’ “war based on lies” propaganda:

In a bitter parliamentary debate last week, Zapatero repeatedly stated his government would not hold talks on sovereignty for the Basque region and he will not make concessions to bring an end to ETA terrorism.

During Zapatero’s appearance before parliament, the opposition Popular Party (PP) leader Mariano Rajoy questioned if the prime minister would enter into negotiations on Basque sovereignty, a possibility Zapatero categorically rejected.

Rajoy said Zapatero not only faced criticism from the PP but also from victims of terrorism, and said that regrettably it appeared “he is looking to achieve a truce at any cost”.

In response, Zapatero accused the conservative PP of spreading lies that were damaging to the prospects for peace.

He also said failure to tell the truth was unwise politically, noting that Rajoy would be able to confirm that by looking back on recent events.

“You led us into war with lies (alluding to Spain’s participation in the Iraq war under his predecessor, Jose Maria Aznar, of the PP) and now you want to put lies in the way of peace prospects that are as difficult to achieve as they are necessary and desired and put even more lies (in the way of) the stability, future and cohesion of Spain, which is fully safeguarded by democracy and the will of the citizenry,” Zapatero said. 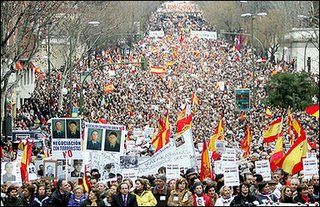 Barcepundit reported on a significant similar protest back in June of 2005.

In the Bullpin– An ETA bomb blast injured 52 in a May of last year. 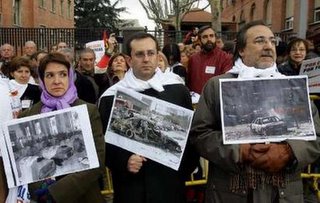 People, holding pictures of ETA attacks, march through central Madrid to protest against the government’s policies regarding anti-terrorism February 25, 2006. The demonstration, led by the associations of victims of terrorism, demanded no negotiation with Basque separatist guerrilla group ETA. (REUTERS/Andrea Comas)

Last year, Prime Minister Zapatero dis-invited the US to a military parade but instead invited Venezuela and Cuba.

Earlier this month, Zapatero condemned the West about “the escalation in disturbing tensions provoked by the publication of Danish cartoons.