Today is the one year anniversary of the bombing death of Lebanon’s former Prime Minister Rafik Hariri and the resulting toppling of the Lebanese Baathist government in the Cedar Revolution.

There were not many calls for the return of the Baathists at todays celebration. 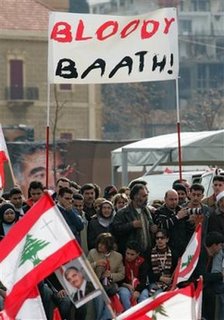 Lebanese supporters of Lebanon’s slain former Prime Minister Rafik Hariri, seen in pictures, hold a banner criticizing Syria’s ruling Baath party as others wave Lebanese flags during a demonstration to commemorate the first anniversary of Hariri’s assassination, in the Martyrs’ Square, in downtown Beirut, Lebanon, Tuesday, Feb. 14, 2006. Hundreds of thousands of flag-waving Lebanese packed a square in central Beirut on Tuesday to mark the anniversary of the assassination of Hariri, a momentous event that ended Syria’s long domination of its smaller neighbor. (AP Photo/Hussein Malla) 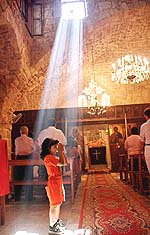 A young girl prays during the turmoil last year.

From Beirut to the Beltway says that up to one million Lebanese rallied today at Martyr’s Square in Beirut.