“Here are the twelve cartoons that led Muslims to declare war on the ‘blasphemous West’. In reality,if you look carefully at them, you’d notice that there’s nothing offensive in them.”

Italy’s Libero newspaper today led with this article: “Islam sues Libero” – for the Mohammed cartoons. This is a threat to everyone’s freedom”
Stefania has more

Roberto Calderoli, a member of the anti-immigrant Northern League party, is planning on sporting a Muhammad Cartoon T-shirt with the 12 published Muhammad cartoons on it and handing out others to colleagues today:

The minister is quoted as saying: “I’ve had T-shirts made with the cartoons that have upset Islam and I shall start wearing them today.”

He added that it was “time to put an end to this story that we need to dialogue with these people”, and asked: “What have we become, the civilisation of melted butter?” 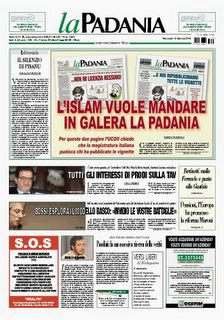 Publius Pundit has more on the Radical Islamic Italian group that is planning on suring all of the Italian newspapers that publish the Muhammad cartoons:

The UCOII (Union of the Islamic Communities in Italy) is a pro-Hamas organization that controls most of the mosques in Italy. As the brave investigative journalist, Il Corriere della Sera’s Magdi Allam often states,these mosques – with UCOII blessing – preach jihad and hatred against the ‘infidels’. UCOII is a sort of Islamic Mafia. Their target are several newspapers and TV programmes that dared to show the cartoons.

The newspapers being targeted are: Libero , La Padania, La Stampa and Il Corriere della Sera. While one cannot say for sure what will the latter two newspapers’ reaction be, Libero and La Padania are two anti-politically correct dailies that are unlikely to apologize or cave in. UCOII will find it hard to silence them.

This sounds very scary!
Elsewhere, the EU and UN are talking with the “Muslim Vatican” about a new anti-defamation charter:

El Pais writes that the EU and the muslim “Vatican” – Cairo’s Al Hazar university – are exploring ways to support a UN charter against religious defamation.

“We have talked about a project resolution to be put before the general assembly of the UN, against defamations of religions,” declared Egyptian foreign minister Ahmed Abul Geit after meeting EU foreign affairs chief Javier Solana.

German newspaper Der Tagesspiegel yesterday published a cartoon depicting the Iranian football team at this summer’s World Cup in Germany with explosives attached to their chests, opening up a new front in the row over caricatures of the prophet Mohammed.

Protesters threw stones and fireworks at the German embassy in Tehran over the cartoon row in general, German media report, with chants such as “Germany, you are fascists and servants of Zionism.”

The Brussels Journal has more on the UN resolution on defamation of religions from December which was backed by the Organisation of the Islamic Conference (OIC).

One Leftist website is claiming “the cartoons were a setup by Neocons and NATO intelligence to mobilize the armies, bases, and treasuries of Europe in support of the lunatic plan to the Bush-neocon clique for a nuclear sneak attack and punitive expedition against Iran.”

Back on earth, the Coalition of the Swilling is promoting a Danish Dinner Night.