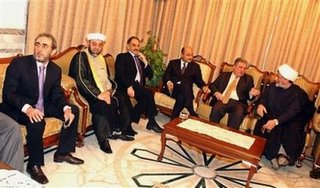 Iraqi Defense Minister Saadun al-Dulaimi warned the media to quit exaggerating the violence and destruction in the country… or face the consequences!

Iraqi newspapers inciting violence will be suspended and their journalists arrested, Defense Minister Saadun al-Dulaimi said Saturday, unveiling a new security plan for the violence-wracked country.
“This is a warning to media working in Iraq,” he said in a press conference.

Dulaimi also slammed the media for exaggerating violence since the blowing up of the Al-Askariya shrine in Samarra on Wednesday which sparked days of sectarian violence, saying the official death toll was 119 civilians.

“After verification on the ground, 119 civilians were killed since Wednesday, not 183 as reported in the media,” he said.

“The government calls on them (media) to assume full responsibility and play a role in reinforcing unity and to reject anything promoting violence or sedition.”

“We will take disciplinary action against any publication inciting violence or terrorism and its journalists will be arrested.”

He said that only one mosque had been completely destroyed in the violence and six partially damaged, while one was temporarily occupied. Twenty-one others were lightly damaged, said Dulaimi.

Omar at Iraq the Model has the official numbers from the Defense Minister’s press conference:

Mosques attacked/shot at without damage: 21 not 51
Moderately damaged: 6 not 23
Mosques destroyed totally: 1 not 3
Mosques occupied by militias: 1 not 2 (evacuated later).
Civilians killed: 119 not 183

It was also announced that day-time curfew in Baghdad and three other provinces (Salahiddin, Diyala and Babil) will continue for another two days.

More from the press conference:

In the same press conference, the interior minister said “we are not going to show tolerance towards those who cause violence anymore, those who felt like doing something have done what they done but we will accept no more of this” obviously referring to those who let their anger push them to violence.

The defense minister added that they are working in the government on activating the counter-terrorism laws which includes “arresting anyone who’s found guilty of provoking violence”.

It really is a shame that the Iraqi media has the nerve to slant their news reports and exaggerate circumstances.