Hamshahri Newspaper in Iran published the rules for their international Holocaust Cartoon Contest today on their website. 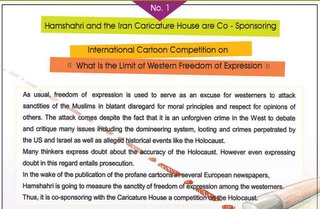 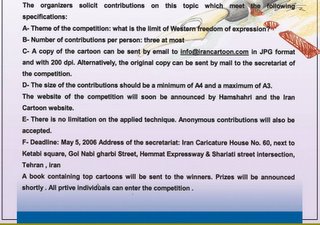 The number of contributions per person is 3 entries at most.
You may email your entry to: [email protected]

Hamshahri intends to “test” the West’s boundaries of free speech by sponsoring the cartoon contest.

It also asks for cartoons covering “America and Israel’s crimes and plundering”.
Graphics editor Farid Mortazavi, who announced the contest, challenged Western newspapers to publish the Iranian cartoons as they did the European ones.

As the “row” has escalated, Tehran has cut trade ties with Denmark because of the cartoons, first published there last September by the conservative Jyllands-Posten newspaper, and recalled its ambassador in Copenhagen.

The new Iranian President is clear on how he wants to “wipe out” Israel, yet isn’t it strange how Iranians and certain other Muslim groups have channelled their anger and hatred towards Isreal in reaction to the Danish cartoons? 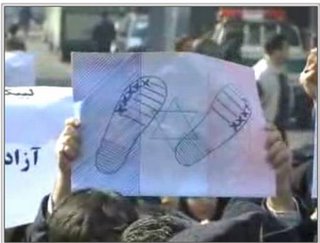 Scenes outside the Tehran French Embassy during Sunday’s protest against the Danish Muhammad cartoons. (Reuters video) 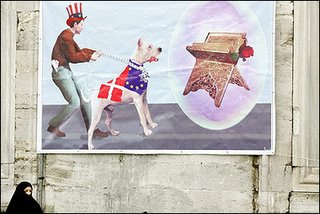 A Turkish Islamic woman stands under a poster, showing Uncle Sam holding a dog wearing Danish and EU flag with Jewish star chain in front of the Koran, on the wall of the Beyazit mosque in Istanbul during a protest against the publication of cartoons of Prophet Mohammed in the Danish daily Jyllands-Posten in September 2005.(AFP/Mustafa Ozer)

In Iran they are holding an “Holocaust Cartoon Contest” of all things! Meanwhile in Israel… 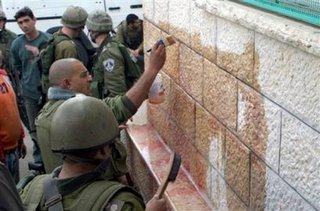 …Soldiers remove graffiti insulting the Prophet Muhammad found Sunday scrawled on a mosque in the village of Nebe Elias. (AP)

John Stephenson has reaction to the Telegraph‘s article today on developing plans for Iran.