The local Toledo Muslim Community helped with the terror investigation leading to the arrests. 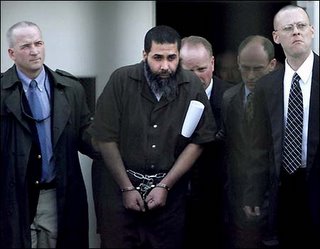 Marwan Othman El-Hindi, 42, a U.S. citizen born in Jordan, is escorted by officials after being indicted by a federal grand jury. (FOX)

Three Muslim men with mideast backgrounds were arrested earlier today for planning terror attacks against US troops in Iraq:

Three Muslim men from the Middle East were charged with plotting terrorist attacks against U.S. and coalition troops in Iraq and other countries.
One of the men, a citizen of both the United States and Jordan, also was accused of threatening to kill or injure President Bush, according to the indictment filed in Cleveland that was released Tuesday.

All three, who lived in Toledo within the last year, were arrested over the weekend, Assistant U.S. Attorney David Bauer said.

An unidentified person with a military background helped the U.S. government foil the plot by working with the suspects while secretly gathering evidence. That person, a U.S. citizen considered a cooperating witness, was identified in the indictment only as “the trainer.” Prosecutors also had help from other people in Toledo, U.S. Attorney Greg White said.

Attorney General Alberto Gonzales did not exclude the use of warrantless wiretapping in this investigation, but he said prosecutors were careful not to do anything that could jeopardize the case.

“This case stands as a reminder of the need for continued vigilance in the war on terrorism,” he said at a news conference in Washington.

The three had met several times and were planning on recruiting and training others for violent jihad against the United States. 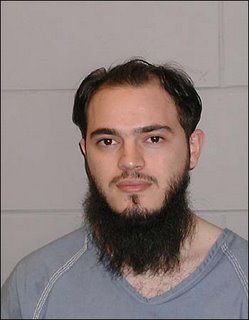 All of the suspects have strong ties to the Middle East:

The men named in the indictment are: Mohammad Zaki Amawi, 26, who was a citizen of Jordan and the United States who lived in Toledo until August 2005; Marwan Othman El-Hindi, a 42-year-old naturalized U.S. citizen born in Amman, Jordan who lives in Toledo; and Wassim Mazloum, a 24-year-old legal U.S. resident who operated a car business with his brother in Toledo after entering the United States from Lebanon.

Wassim will not have to worry about his car business. 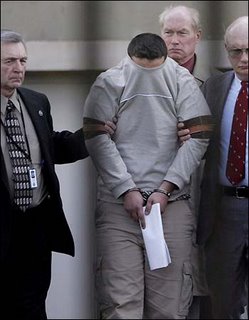 Wassim I. Mazloum, 24, is escorted out of the Federal Courthouse in Toledo, Ohio. (FOX)

Counterterrorism Blog has the indictments posted and other information on the investigation including this:

The defendants learned to use plastic and nitro explosives. They sent money to Iraq and used a business and a charity to further support co-conspirators in Iraq and cover their travel overseas. FBI Deputy Director John Pistole credited “improved information sharing and intel-gathering techniques.” AG Gonzales would not state whether the NSA surveillance program was responsible for indictment information and didn’t name the Iraqi terrorist group(s) which the defendants allegedly supported. AG Gonzales also refused to state whether one defendant was arrested in Jordan or even where they were arrested.