While its neighbor was having its Mideast embassies firebombed, the Prime Minister of Finland was in shmoozing in Kuwait. 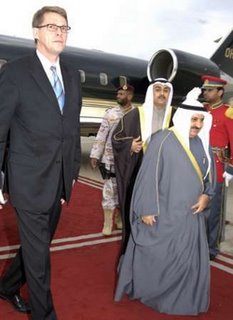 This news was reported on Tuesday at the Syrian Arab News Agency:

Finland’s Prime Minister Matti Vanhanen on Tuesday apologized to the Muslims in the world after an extremist rightist web site had reprinted the caricatures which offended Prophet Mohammad.

Finland’s News Agency quoted Vanhanen as saying in the Italian city of Toronto where he attends the Winter Olympic Games that the police of his country have opened an investigation into this matter.

Earlier, a member at the Finland Parliament considered in a statement the cartoons publication by an extremist group as an irresponsible act that threatens the country’s national security.

A Finnish website, Suomen Sisu, a far-right website(?), has published the cartoons saying the publication was “the expression of an opinion” prompted by the Swedish site being closed:

The company hosting the Web site of a far-right Swedish party which posted the cartoons of the Prophet, plus one sent in by a reader, was shut down last week after police and the Foreign Ministry said it could put Swedish lives at risk.

Finland has a small community of about 30,000 Muslims, in a country of 5.3 million people, and there have been only small and peaceful protests so far about the Danish cartoons.

The Finnish Prime Minister says that police are investigating the incident!

Finnish Prime Minister Matti Vanhanen says he is sorry Muslim feelings have been hurt by the publication of Prophet Mohammed (PBUH) caricatures in his country.

“I apologise on behalf of myself and of the Finnish government that the religious feelings of Muslims have been hurt also in Finland,” Mr Vanhanen told a foreign agency in Turin, Italy, where he is following the Winter Olympics.

Finland leaves the Danes high and dry to fend for themselves as its Bureau of investigation looks into the cartoon posting matter:

Finland’s National Bureau of Investigation (NBI) told the Finnish News Agency (STT) on Tuesday that it would look into the legality of the move by Suomen Sisu, a right-wing nationalist organisation, to post the cartoons of the prophet Muhammad on its website.

The request had come from the Ministry of the Interior, said Tuula Kyrén, an NBI spokeswoman.

Suomen Sisu posted the Jyllands-Posten cartoons on its website on Friday.

The organisation, which calls itself “a revolutionary Finnish nationalist movement”, said in a statement dated Friday that the move was a response to what it says was a decision by the Swedish Security Police (Säpo) and the country’s Ministry for Foreign Affairs to pull the plug on SD-Kuriren, the website of the Sweden Democrats, a nationalist party.

SD-Kuriren was closed down on Thursday after it posted the cartoons.

Laila Freivalds, the Swedish foreign minister, sternly denied any government involvement, but the leadership of Säpo said it had contacted web hosting firm Levonline. Torkel Nyberg, the chief executive of Levonline, told news agency Tidningarnas Telegrambyrå (TT) that the decision to shut down the site was entirely the company’s.

Hat Tip to Kim M. on the story!

Hideous Hypocrisy: Stefania has the news that Former German Chancellor Gerhard Schroeder apologized for the offensive cartoons while in Cairo on Monday.

Meanwhile, Prairie Pundit has some terrific news on Denmark exports!!