NeanderNews earlier this week discovered one of the “fake cartoons” to actually be a shot from the hog calling contest in France.

Now,… questions pop up about one of the other cartoons.

Volokh Conspiracy is leading the charge to find the truth out about one of the other two remaining “fake cartoons”. Eugene suggests this photo that was inserted into the package that was shown in the Middle East by the terror-linked Imam from Denmark was also a bad forgery. Here is the writing from that cartoon: 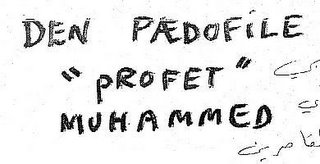 I am not a graphologist, but a student who had a chance to attend very interesting lecture two years ago — a part of it was about the fact that whatever alphabet you learn to write the first influences the way you write in all the other alphabets you later learn. Hence you can identify, if sometimes with difficulty, that an individual learned to write Cyrillic or Arabic before they learned to write Latin [Roman letters]…

..The more I considered K’s comment, the more troubled I became. These extra three cartoons were presented as evidence of what non-Muslim Danes thought of Muslims, but what if all the cartoons were created by Muslims themselves, just to garner sympathy or to inflame anti-western sentiment? The pig “cartoon” has already been shown to be a hoax, though the perpetrator of the hoax has not been determined.

…I was struck by two letters that seemed (to my untrained eye) to have been drawn in an unconventional way. The first was the first “M” in Muhammed. In writing a capital “M,” it is common to start with a downstroke at the left side of the “M,” then go back to the top left of the “M” and complete the rest of it without a break. It appears that the person who composed the demon pedophile cartoon did much the same thing, but instead started with a downstroke on the top right, and then returned to the top right to complete the letter “M” without a further break. In other words, it appears that he was writing that capital “M” from right to left, not from left to right as most westerners would have done. The first website on Arabic writing that I went to, not only confirmed my understanding that Arabic letters are written from right to left, but showed that there is a standard Arabic letter (alif) that consists of a single downstroke, so such a downstroke may well have been a natural movement for an Arabic writer.

The second letter that struck me as odd was the placement of the capital P in the word “PROFET.” Note that the top of the P is not on the same level as the rest of the capital letters in the word or the note. I wondered whether there were any letters in Arabic that are commonly written with a tail below the line and a body that does not reach the top of the adjacent letters.

Eugene has much more at the Volokh Conspiracy.

Commenter Yohannbiimuu commented when the fake cartoon story was first reported here (The Brussels Journal, via Wikipedia, had already reported on the fakes) back on February 2, 2006, that their was something fishy:

Regarding the three additional “cartoons,” the first is obviously a drawing of some sort, but not of the quality I’d expect from someone who drew designs for a living. It is more like the crude doodlings I’ve seen from Palistinian publications.

However, the other two are not drawings at all, but rather are staged photographs. Why hasn’t anyone pointed out this obvious inconsistencey?

The comments on Volokh Conspiracy are interesting and helpful if you have an interest in helping solve the case of the “fake cartons.” Your help is appreciated!