“We were doing our job as journalists. But apparently some people found that not covering my head was provocative. They called me a blasphemer while I was sitting on the bus. They threw stones and shoes. As a reporter from Konya I was ashamed.”

Just a guess, but… this news probably doesn’t help the Turks much in their quest for EU membership. Those Irish and Austrian girls aren’t much into things like that. 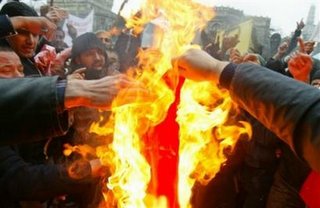 Via Free Thoughts – A Turkish female journalist was stoned at a Muhammad Cartoon protest for not wearing a head scarf:

Aliye Cetinkaya, a journalist from the Turkish daily Sabah newspaper, who was reporting on the recent protests over the offensive caricatures of the Prophet Mohammed, was stoned in Konya for reasons demonstrators said were provocative – as she did not cover her head. Cetinkaya was taken away by male colleagues after stones hit her head and shoulders. The female journalist was attacked for being ‘sexually provocative’ for not wearing a head scarf at the demonstration organised by the Peoples Education Research and Support Group in Konya (He-Da-Der) and entitled ‘Loyalty to the Prophet’.

A group of protestors insisted that Aliye Cetinkaya get off the bus where she was reporting the march, as they claimed she was provoking the crowd. At this moment, somebody started reciting the Koran into a microphone.

Approximately 30 people then started throwing stones at Cetinkaya, seated with her legs dangling from the back of the vehicle and taking notes. They claimed that her clothes and way of sitting was inappropriate while the Koran was being read, and shouted words of abuse at her.

Cetinkaya had to be rescued by her colleagues

Two men were apprehended and charged with stoning on Monday, February 13, 2006.

But that is not all… an Islamist Group is filing charges against Cetinkaya for “Disturbing the Peace” that carries up to 3 years of jail time!

One of the groups in the demonstration, the Islamist “Association for Training, Research and Cooperation of the People” (HEDA-DER) meanwhile filed a complaint against Cetinkaya the same day, accusing her of disturbing the demonstration, an offence that carries a fine or between 18 months and three years imprisonment under a 1983 law on public demonstrations.

“Freedom of the press is one thing – Unnecessary provocation is quite another.”