** Abu-Laban mastermind-ed the plan to bring the cartoons to global attention. **

Still no word on who is responsible for the hog calling photo. 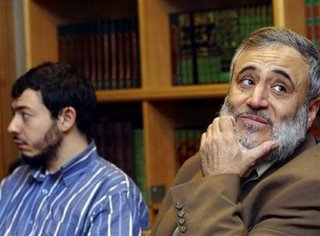 Imam Ahmed Abu Laban, right, speaks to the media after Friday prayers Friday Feb. 10, 2006 at his mosque in Copenhagen, Denmark. Abu Laban denied stirring violence in the Muslim world over the Prophet Muhammad drawings and called on the West to respect Islamic values. ‘We have not put fuel on the fire,’ Abu Laban told reporters. ‘We have not stirred or agitated the Muslim masses.’ Abu Laban and other Danish clerics have been accused of stoking outrage over the cartoons by spreading anti-Danish propaganda to Arabic media and during trips to the Middle East. At left is Ahmed Akkari, who went to the Middle East in December with the delegation. (AP Photo/John McConnico)

Hard times for the Imam behind the cartoon controversy:

The anti-immigrant Danish People’s party, the government’s parliamentary ally, wants him tried for high treason. Several political parties want the legality of his residence permit investigated. And an opinion poll published yesterday showed that 58 per cent of Danes regard Mr Abu-Laban and his cohorts as the main reason the cartoon conflict has spiralled out of control.

Abu Laban preaches from the pulpit on freedom of speech for Muslims,
VIDEO HERE
(Ekstra Bladet) 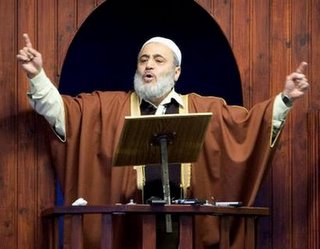 A quick fall for the cartoon fakers:

The imam’s fall from grace was comprehensive and quick, and its cause is clear: Mr Abu-Laban mastermind-ed the plan to bring the cartoons to global attention. Had he not done so, Danes argue, the world would not have noticed a few drawings in an obscure Danish newspaper.

Mr Abu-Laban, a softly spoken 60-year-old of Palestinian origin, refutes this, saying he was motivated by a desire to improve the conditions of Muslims in his adopted home. “I did not expect a reaction that would damage Danish interests,” he said.

This is a video clip of Abu Laban says that he feels sad for the boycotts on Denmark goods, when he had told Aljazeera something completely different on the same day.

Even Danish Muslims are disgusted with the Radical Imam who started the controversy even though Abu Laban continues to deny his actions had anything to do with inflaming emotions in the Middle East:

Abu Laban and Akari are at the center of a public uproar. The Danes – both Muslims and Christians – accuse them of sending delegations to the entire Arab world with caricatures of the Prophet Mohammed. Among them were a number of provocative caricatures that had never been published in Denmark – Mohammed with a pig’s snout, a dog having intercourse with a praying Muslim and the prophet as a pedophile. One delegation, headed by Akari, presented these pictures to the leaders of the Muslim Conference in Cairo in December. In response the conference denounced Denmark for their publication.

The Danish media also discovered that several imams had gone to Saudi Arabia last month and distributed a booklet displaying the caricatures and pictures to pilgrims in Mecca. Gulf television networks Al-Jazeera and Al-Arabiya dealt with the issue constantly. The prominent Muslim scholar Sheikh Yusuf al-Qaradawi called for a “Muslim day of rage” against Denmark and for the boycotting of its exports. Text messages spread throughout Saudi Arabia urging people to avoid purchasing Danish products. The monarchy also recalled its ambassador from Copenhagen.

Naser Khader, leading Muslim moderate, said the two are “ignoramuses” and “alien to all that Denmark represents. Most Danish Muslims are peace lovers and don’t want to see the Danish flag burned all over the world.”

The feeling on the street is that the two have gone too far. “They don’t represent me,” said Gawad, a vendor at a vegetable shop in the center of town. “They have only damaged the relations between the Danes and the Muslims.”

Last week he told Danish television that he denounced the boycott of Danish products and called for its cancelation. One hour later, however, in an interview with Al-Arabiya, he said he was “pleased” with the boycott.

Since then the Danish media has not ceased to delve into Akari and Abu Laban’s past. Apparently, the Imam was deported from Egypt due to his membership in the Muslim Brotherhood. Other reports said Abu Laban sheltered Al-Qaida members in his house, including the organization’s No. 2, when they were driven out of Egypt in the 1980s.

What appears to frighten Danes the most is the “enemy within.” A recent poll shows that 80 percent of Danes believe a terror attack will take place in Denmark following the caricature storm.

He said he does not need anyone to represent him as a Muslim. “I’m a Dane, ” he said, “and I’ll vote for the party that helps me as a Dane, not as a Muslim.”

Captain Ed (via The Anchoress) has a translation posted from a Jyllans-Postens article. It is an in depth timeline of the events that led up to the rioting.
A couple of quick observations:

– The infamous 43 Page document that was presented in the Middle East had text labels of the Danes as “infidels”
– Mona Attia, the Egyptian ambassador earlier claimed she did not assist with coordinating strategy with the imams. This does not appear to be true according to this article… The Egyptian embassy also helped with visas and provided contact to the League of Arab States in Cairo.
– Ahmed Akkari, claimed that one of the goals of the delegations w
as to avoid “a new Van Gogh-case”. This doesn’t make sense. His actions did nothing but stir up tesnions.
– The imams lied about not having permission to build new mosques by the government.