Hugo Chavez blows a kiss to Condoleezza Rice during his Sunday broadcast after she accused Venezuela of being undemocratic. Ironically, in this same speech Chavez proposed the “possiblity” of extending his terms in office,
VIDEO HERE

Hugo moves in the footsteps of good friend Fidel as he proposes amending the Constitution of the embattled Venezuelan democracy to keep himself in office for another term… or three, or four. 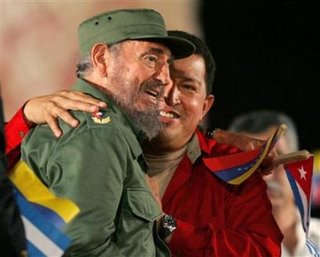 Only 25% of voters turned out in the December election in Venezuela after a boycott by Opposition parties. However, the legal but not legitimate election still gave Hugo Chavez all of the 167 open congressional seats. He needed the additional seats in Congress to alter the Constitution so that Venezuela would remain under Chavista control indefinitely. A two-thirds majority in parliament is needed for Chavez to remove the country’s constitutional limit of two presidential terms in office. Chavez now has that and more. Plans were drawn to extend the Chavez regime until 2030 back in December. But on Sunday, Hugo Chavez started getting the public warmed up to the idea for unlimited terms during his weekly broadcast.

Hugo Chavez came out yesterday taunting Condoleezza Rice during his weekly broadcast after her attacks on his regime and the threat he poses to a democratic Venezuela earlier in the week:

Hugo Chavez launched a new verbal attack on Sunday against US Secretary of State Condoleezza Rice, bluntly warning her: “Don’t mess with me, girl.”

Chavez has taken potshots at Rice since she called last week for an international “united front” against Venezuela and described the leftist leader as a “challenge to democracy” in Latin America.

Chavez fired back last week by calling Rice “the imperial lady,” and on Sunday deliberately mangled her name as “Condolencia,” Spanish for “Condolences.”

“She messed with me again,” he said in his weekly “Hello President” television show. Chavez blew a kiss to the chief US diplomat, but added: “Don’t mess with me, girl.”

Chavez has responded to US criticism with verbal attacks, but also by threatening to cut off oil exports to the United States if Washington went too far campaigning against his government.

Chavez threatened to cut off oil exports to America on Friday after Thursday’s promise to keep it flowing.

Maria Corina Machado, the leading Venezuelan democracy activist and founder of the non-governmental agency Sumate, was sentenced to 16 years in jail this month by one of Hugo’s kangaroo courts. 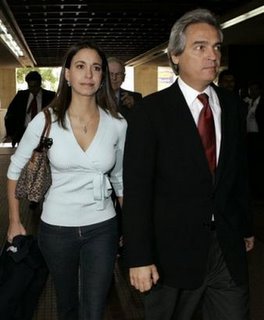 Maria Corina Machado, left, and Alejandro Plaz, leaders of the vote watchdog group, Sumate, arrive to court in Caracas, Venezuela, Tuesday, Feb. 7, 2006. Machado and Plaz are on trial for allegedly conspiring against Venezuela’s President Hugo Chavez’s government for receiving U.S. funding and could face up to 16 years in prison. (AP Photo/Leslie Mazoch)

Back in March 2005, Douglas MacKinnon wrote this:

Ultimately more dangerous to us than Osama bin Laden, Abu Musab Zarqawi, Ayman al-Zawahiri, or any other terrorist operating out of the Middle East, Hugo Chavez represents a grave threat to America’s well being.

It looks more and more like that threat is going to be hanging around a while. 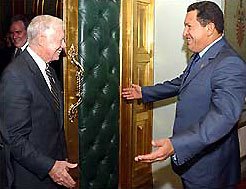 Jimmy Carter and Hugo Chavez seem to hit it off well together. Many Venezuelans blame Jimmy Carter (see also Ethiopia) for rubber stamping a fraud-filled election for Hugo.

A. M. Mora y Leon has more on Hugo’s secret stash today at Publius Pundit. This may hurt the Marxist in the future.