President Bush met with two democracy activists from Belarus at the White House today. Irina Krasovskaya and Svyatlana Zavadskaya are co-founders of an organization called “We Remember,” which seeks justice for the disappeared in Belarus. 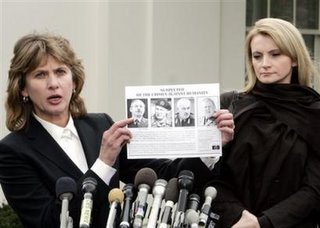 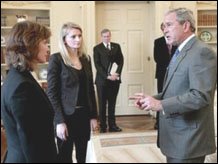 During a meeting on Monday, February 27, 2006 at the White House, the President discussed the state of democracy and human rights in Belarus in the run-up to the March 19 Belarusian presidential election, and stressed his commitment to support the people of Belarus in their effort to determine their own future. The United States is deeply concerned about the Belarusian government`s conduct leading up to the election, harassment of civil society, and failure to investigate seriously the cases of the disappeared.

George Bush is meeting with widows of pro-democracy businessmen and a journalist from Belarus, the last dictatorship in Europe:

“The president intends to underscore his personal support for their efforts to seek justice for the disappeared, as well as for all those who seek to return freedom to Belarus,” said spokesman Scott McClellan.

With 20 days to go before Belarus holds a presidential election, Bush was to drop by a meeting of his national security adviser, Stephen Hadley, with Irina Krasovskaya and Svetlana Zavadskaya, said McClellan.

The meeting was “intended to underscore our concern about the Belarussian government’s conduct leading up to the election, harassment of civil society and the political opposition and failure to investigate seriously the cases of the disappeared,” said the spokesman.

“We continue to stand with the people of Belarus in their effort to determine their own future,” he told reporters.

Observers fear any protest in Belarus could be brutally repressed. The government in Belarus systematically accuses the opposition of being manipulated by the West, and particularly the United States, which has called Belarus the “last dictatorship in Europe.”

Protests in Belarus are rare. This mother braved the possibility of arrest in protesting against her son’s imprisonment. 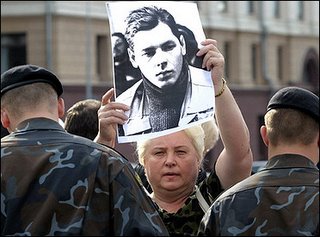 Olga Zavadskaya, mother of missing Dmitry Zavadsky, a cameraman in Minsk for Russian broadcaster ORT, holds his portrait during a protest in Minsk, 2005. US President George W. Bush was to highlight US concern about political repression in Belarus by meeting the widows of a pro-democracy businessman and a journalist, the White House said (AFP/File/Dmitry Brushko)

Later today, Russia warned the West not to mess with the Belarus’s presidential election in March.

Belarus Democracy Activists are calling for a day of solidarity, March 19, 2006, October Square in Minsk at 8 p.m.

The Belarus Solidarity organization has more. Photos of Belarus supporters are HERE.