** Former US President Bill Clinton becomes the first Western leader to urge nations to convict those who published the Muhammad cartoons!! **

This was not the first time that Bill Clinton spoke out against the Muhammad cartoons but it was the first time he spoke publicly about prosecuting Westerners for their freedom of speech choices in regards to the cartoon controversy. 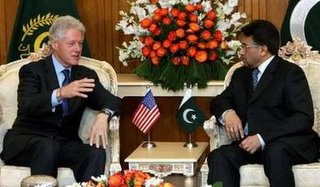 Pakistan’s President Pervez Musharraf (R) talks with former U.S. President Bill Clinton in Islamabad February 17, 2006. Cartoons of the Prophet Muhammad were probably the result of ignorance not callousness and should not be the cause of more violence, Clinton said on Friday. (REUTERS/B.K.Bangash)

Former US president Bill Clinton on Friday condemned the publication of Prophet Muhammad’s (PBUH) caricatures by European newspapers and urged countries concerned to convict the publishers.

Talking to reporters after meeting Prime Minister Shaukat Aziz in Islamabad, Clinton said he disagreed with the caricatures and that the publication was against religious and ethical norms. Clinton said he had no objection to peaceful demonstrations being held worldwide, but this was not the time for violence. He said it was the time to promote inter-faith harmony and stand together on the issue.

Mr. Clinton said “people in the United States have also condemned the publication and they are deeply concerned on it.”

Bill… Please speak for yourself!

Former U.S. President Bill Clinton on Friday strongly condemned the publication of blasphemous caricatures, saying “it was a mistake and infringe the feelings of Muslim world.”

Talking to newsmen here at Prime Minister House along with Prime Minister Shaukat Aziz, former US President said, “I strongly disagree with the creation and publication of sketches.” Clinton said he was the first person who spoke against these blasphemous sketches. He said there is need to promote interfaith harmony the world over and stand together on the issue.

Clinton said religious convictions of the people should be respected at all costs and no media should be allowed to play with the religious sentiments of people of any faith.

He said media can criticise issues including government, policies and people but no one has the right to play with the religious sentiments.

Clinton said people in America have also condemned the publication and they are deeply concerned on it and added they respect Islam as it is fast growing religion in US.

He said the world should avoid such things which could damage or harm the religious feelings of any group including Muslims.

So, the Pakistani Nation (most respected publication in English) and Daily Times (Daily Times published from two major cities of Pakistan – Lahore and Karachi has a combined
circulation of 60,000 copies on week days and 75,634 copies on Sundays. According to a survey carried out in 9 major cities of Pakistan, Daily Times is very popular among high income groups), two of the largest circulating and respected newspapers in Pakistan carry the same if not similar news on Bill Clinton. This is very disturbing!!

Update2: (12:00, 2-18-06, CST) Mark in Mexico has other thoughts on the validity of the “let’s convict” part of Bill’s speech. But, just because the AP or BBC would not report the story, means nothing. They have certainly omitted facts in the past.